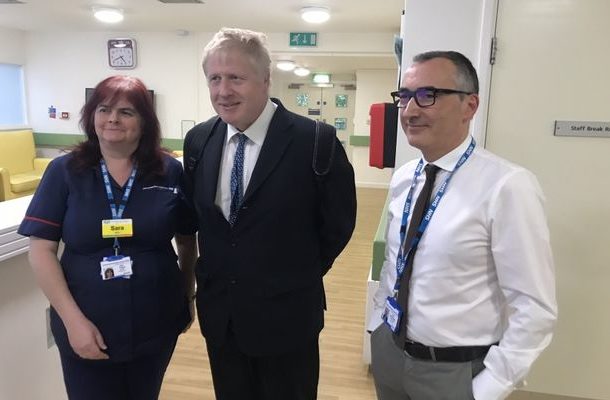 A hospital matron who proudly posed for a picture with Boris Johnson was yesterday named as one of the NHS heroes who lost their lives trying to save others.

Sara Trollope, 51, had dedicated her entire 33-year career to the NHS and was just months from retirement when she died from coronavirus.

A close friend of the “devoted” health worker said the job that she loved so much ended up costing her life.

It emerged Sara is one of at least 21 health workers to die from the disease.

It was also revealed that another 917 people in total have died after contracting Covid-19 in the UK, bringing the hospital death toll to 9,875.

The number of people to test positive for the illness now stands at 78,991.

Sara’s devastated friend Tracy Woods, who set up a web fundraising page for the matron’s shattered family, claimed Sara kept working despite a lack of PPE.

She wrote online: “Sara cared very much about her patients and staff and completely loved her job. Sadly it was this job that cost her life.

“She had to work with insufficient PPE and contracted Covid-19. She fought this bravely for seven days until it became too much for her and she passed peacefully.”

Sara had her picture taken standing alongside the Prime Minister a year ago when he visited her hospital in his Hillingdon, West London constituency.

Mr Johnson posted the snap on his personal website last April. He wrote: “It was really inspiring to meet with these committed teams who do such fantastic work providing a safe and therapeutic supportive environment for those that need it.

Sara was well liked by colleagues, who are devastated that she is one of the many healthcare workers who have died from covid-19 (Image: Twitter)

“Care and compassion really matter and it was fantastic to hear…about the work that goes on to support residents of Uxbridge and South Ruislip.”

Sara, from Watford, cared for older adults with mental health conditions including dementia.

She also looked after husband Gary – a former soldier who suffered life-changing injuries.

Describing his wife, he said: “All she ever wanted to do was help people. She joined the NHS at 18 and devoted her entire life to it. We are broken. It’s absolutely devastating.”

Son Kyle wrote: “You gave up your life looking after so many people. It’s just so unfair you’ve been taken away from us… I encourage everybody to please stay inside.

“The people from the NHS give up so much for us, it’s the least we can do for them.”

Two Filipino nurses have also made the ultimate sacrifice. Leilani Dayrit, 47, suffered from asthma but gave 16 years to the NHS. She worked at St Cross Hospital in Rugby, Warks, and died at home on Tuesday.

Her 19-year-old daughter Mary said: “My mother was a compassionate woman…She was a very hardworking and dedicated nurse who loved to look after others. She was known as the ‘mother figure’ to numerous family friends.”

Another lost angel, Amor Gatinao, came to the UK in 2002 and worked at St Charles hospital in London.

She was re- membered as “a warrior”.Wales also lost a nurse. Grandad Gareth Roberts had worked for the Cardiff and Vale University Health Board since the 1980s. The organisation said he was “extremely popular”.

In Oxford, two “popular and hard-working” porters at the John Radcliffe hospital succumbed to the virus.

Both men, who were not named, were married to nursing team members.The hospital trust said: “We all need each other and stand together in honouring memories of our colleagues.”

Heartfelt messages of support poured in online for the 38-year-old, including one that read: “Becky helps and supports everyone and goes above and beyond her call of duty.

“Come on Becky, you’re a bloody fighter. You can beat this lass.”