How African players fared in Europe this weekend 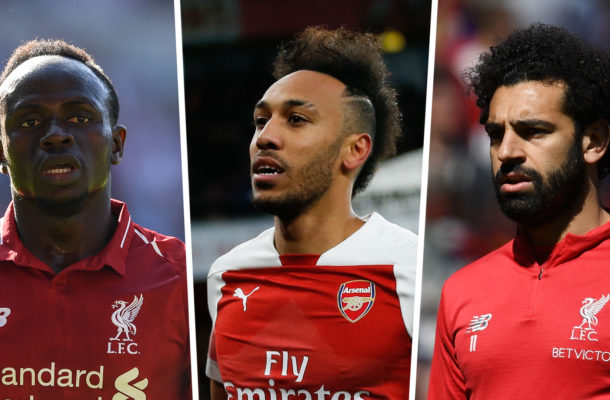 African superstars in the major European leagues were overshadowed at the weekend by Chadian Casimir Ninga, who scored an 11-minute hat-trick for French Ligue 1 club Anger.

Ninga, who played in Chad, Gabon and for two other French clubs before joining Angers this year, achieved his remarkable feat in a 4-1 win over Saint-Etienne after coming off the bench.

In the English Premier League, former African Footballers of the Year Pierre-Emerick Aubameyang and Riyad Mahrez were among the scorers.

Aubameyang's sensational form continued as the Gabon international smashed home his seventh goal of the season to give 10-man Arsenal a 3-2 win over Aston Villa. Pepe also grabbed his first goal for the Gunners from the penalty spot after Aubameyang stood aside to let the Ivorian take the spot-kick in what Arsenal boss Unai Emery described as a "fantastic" gesture.

Egyptian Salah teed up Trent Alexander-Arnold to curl Liverpool's opener into the top corner in a 2-1 win at Chelsea. The European champions have now won 15 Premier League games in a row, but Salah was unable to net against his former club.

Mahrez's renaissance in his second season at City continued as he scored with a deflected free-kick in the Premier League champions' 8-0 demolition of Watford. The Algerian was also brought down for the penalty from which Sergio Aguero converted City's second. Mahrez and City could even have had more in their record Premier League win as he hit the bar with a header in the second half.

Nyom helped Getafe register their first La Liga win of the season by scoring in a 4-2 victory over newly-promoted Mallorca. The Cameroonian defender blasted into the roof of the net from eight yards to give Getafe a 3-0 lead and while Mallorca pulled two goals back, the home side scored a late fourth to seal all three points. It was Nyom's first goal for Getafe.

Ghanaian Duncan turned in a rebound after 47 minutes for his side's third goal in a 3-0 win over SPAL. Sassuolo are eighth after their second win in four matches. It was the first league goal this season for the 26-year-old and seventh in five seasons with the side.