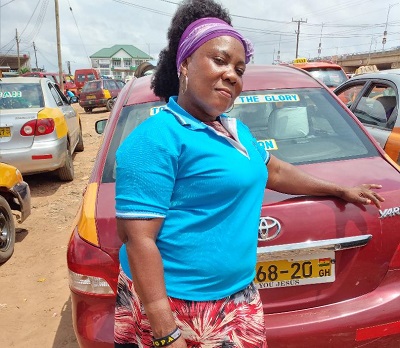 Though Ms Edith Awuah, a trained teacher was able to achieve her childhood dream of becoming a teacher, little did she know that her cherished  profession would be short lived. This  compelled  her to seek an alternative means of livelihood.

The impeccable way teachers dressed, conducted  themselves, and  earned the respect from members of the communities where they served, attracted her to this noble profession.

Initially, her hope was  to retire as a teacher and enjoy the fruits of her labour.  Unfortunately, she had the shock of her life when she returned from China, where she had studied Chinese Language on study leave to discover that her employers had terminated her employment.

She disclosed that the papers for study leave which she had filled and submitted, were not given  to the authorities for  endorsement.

In times of unexpected challenges in life, it takes  a person with perseverance,  courage  and determination to calm the storms of life  and  take  things easy.

Having known her fate, she made several attempts to  enable her to be reinstated, but this  could not materialise.

Ms Awuah  did  not throw in the towel easily as  she wrote application  letters  to  private schools to be employed, but  she was turned down in all the schools she had applied to.

Initially, she attempted selling  African  wear  but this did not attract patronage as she had anticipated, and  was  compelled  to abandon that venture.

When she conceived  another idea of converting, her private car into taxi, she feared  that the  plan  might not be successful.

As fortune would have it, a friend later disclosed to her that he had spent too much on fuel, therefore, he had decided  to convert his car into a  taxi.

This piece of information brought back the idea she had  conceived  to convert her  private car into taxi, and ever since, she has not regretted the bold decision she took.

After she had acquired the necessary papers to work as a taxi driver at the Atomic Junction Taxi Drivers Union, it was not easy getting the permission to operate with the union.

Ms Awuah said  it was initially not easy, but with persuasion, the executives  gave her the green light to operate.

The following day, she reported to work at 6.00am and that has been  her  normal time to commence work.

Ms Awuah admitted that it was not easy in  the  commencement of her driving career, but with determination and the spirit  of hard work, she was able to withstand the difficulties.

“My colleague drivers did not hesitate to give me the needed support and encouragement. Any time l struggled to enter the main road,  they gave me free passage”  she said, and indicated that other drivers gave her  thumbs- up  whenever they identified her.

She said whenever the drivers returned to the station, they were required to register their  car numbers to determine when they would load again.

“The job needs patience and  tolerance since one will  deal with different  passengers. You can  meet a  distressed passenger from home, so you should know how to handle people. Some will hurl insults at you if you do not have change to give them instantly.”

” You will never lack money when  you take to driving.  Looking at the current population of the country, it will be impossible for the government to provide jobs for each person,”  she said.

She has encouraged the youth and  the unemployed graduates not to run away from  driving as though it was a profession reserved for school drop-outs or for a particular group of people, but rather  embrace whatever they could do to earn a decent living.

Ms Awuah said graduates who had made up their minds  to work only in the office, were making a serious mistake, since  they could do better when they tried their hands on other jobs.

According to her, since people had made it in the informal sector, they should be rest assured that they would  also make it, provided they were  focused on the job of their choice  and  asked them to  put whatever they had learnt into practice.

She  said her siblings were confident that she would succeed.  She also disclosed that the  cashiers at the banks marveled at the frequency with  which  she  visited the bank to deposit  money from the sales she had made.

The former  teacher said, if offered  the opportunity to return to the classroom and  teach, she would turn down the offer.

Ms Awuah’s next target is to build a shop at her house and  settle to trade when she becomes tired of driving her taxi.

Ms Awuah attended Peki Training College  in the Volta Region and later enrolled at the University of  Education, Winneba. She taught at Bator Junior High School (JHS), Denu  JHS, Kotobabi  Primary School, and finally at the Association International  School before she went  for further studies in China.

She is the seventh of eight siblings and  a chorister who sings  soprano. She likes  banku with okro stew and boiled yam with palava sauce.