I would have won December polls as CPP flagbearer - Onsy Nkrumah 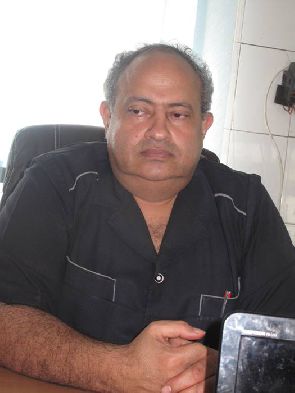 Dr Onsy Kwame Nkrumah, son of a late president of Ghana, Dr Kwame Nkrumah, has disclosed that it would have been easy for him to win the December 7, 2016, Presidential elections if he was the flagbearer of the Conventions Peoples Party (CPP).

Speaking to the New Crusading Guide in an exclusive interview, Dr Onsy Nkrumah said this would have been possible due to his preparedness to bring all the disgruntled members of the CPP and others who have defected to other political parties back to marshal forces against the National Democratic Congress (NDC) and the New Patriotic Party (NPP).

In his opinion Ivor Greenstreet cannot win this year’s presidential elections because he hasn’t done much to compete keenly with the likes of the NPP and the NDC.

According to him, the CPP, as it is now is not strong and lacks what it takes to win the upcoming presidential and parliamentary elections because it’s currently emerging from the wilderness and would need lots of time to grow.

Dr Onsy Nkrumah noted that if he was the flagbearer of the CPP, he would have officially invited Dr Paa Kwesi Nduom and all the members of the Progressive People’s Party, the People’s National Convention (PNC) and the other political parties who were disqualified by the Electoral Commission to join the CPP and help work together to wrestle power from the NDC.

“If I was the CPP flagbearer, I would have regarded this as a golden opportunity to rally around and get all the sympathizers who defected to PPP, PNC etc to join the CPP. This is because the CPP is the natural home for all Nkrumhaist. If we bring all Nkrumahist front together and unite them we then stand the chance of winning power”, he stated.

“I don’t hear Ivor Greenstreet address these issues at all. However, these are the issues that we need him to address to unite the party and to win elections for the CPP. People like Dr Edward Mahama, and Paa Kwesi Nduom are more experienced and can help the CPP wrestle power if they are brought on board , they can help turn the fortunes of the party for good ; and this is what I would have done”, he held.

A Lot of people thought I would be called to become the running mate to Greenstreet but I was not. For me, I think the CPP is now coming from the wilderness, so it must build a strong credibility. If I was the flagbearer I would have had a good chance of becoming the president of this country but with Greenstreet, I don’t Know. I think he needs to show that he is working. He must work to restore the lost fortunes of the CPP.