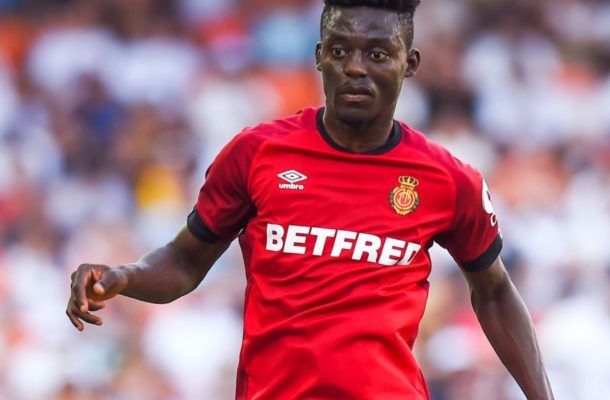 Iddrisu Baba of RCD Mallorca during the Liga match between Valencia and Mallorca at Estadio Mestalla on September 1, 2019 in Valencia, Spain. (Photo by Pressinphoto/Icon Sport via Getty Images)

Real Mallorca's Iddrisu Baba had a game to forget on Saturday morning in his side's two nil defeat to Sevilla in the Spanish La Liga home game.

The Andalusians dominated play for most periods of the first half and rightly took the lead in the 20th minute through  Diego Carlos' header.

The Ghanaian midfielder committed a penalty that resulted in Sevilla's second goal which was coolly slotted home by Ever Banega to make it two nil.

But it was not until the VAR intervened before Sevilla were awarded the penalty after Ghana's Baba Iddrisu was adjudged to have fouled Munir El Haddadi in the box for the penalty.

After several consultation with the Video Assistant Referee (VAR) referee Jesus Gil Manzano pointed to the spot and Ever Banega made no mistake as he slotted home.

Baba for his troubles was shown a yellow card while he was also substituted in the 78th minute by Aleix Febas.

Compatriot Lumor Agbenyenu played the entire duration of the game while Baba Rahman who played in the Cup game in midweek after an injury lay off was not included in the squad.