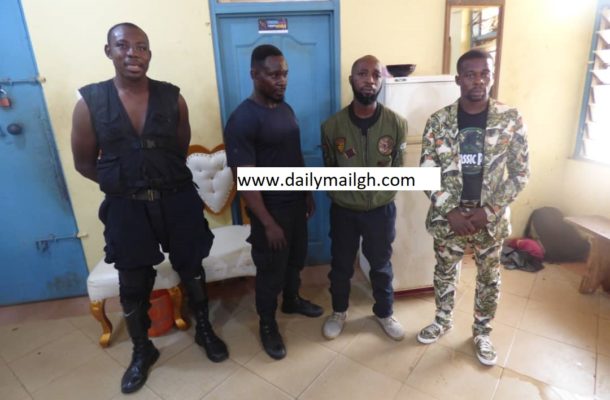 A fetish priest and three others who posed as officers enforcing movement restrictions in Kumasi have been arrested by the police.

They were picked at the Bantama Market in Kumasi by a team of police officers after they failed to comply with the restriction order imposed by the government.

The suspects face charges of extortion after they unlawfully arrested and detained one Michael Asamoah in their Toyota Sequoia vehicle with registration number GN 6061-18.

Though it is not clear why Asamoah was detained by the suspects, Dailymailgh.com gathered that they demanded an amount of ¢100 for flouting the lockdown regulations.

“They were dressed like police personnel and they had unlawfully arrested and detained the victim who was wearing a boxer shorts in the vehicle and demanded the amount of money before his release”, police documents made available to Dailymailgh.com said.

He had come out to urinate and was unlawfully arrested in front of his house where the suspects parked their car and was “detained at the back seat of their car”, the report further stated.

The victim has since been rescued and brought to the Suntreso Police Station where he lodged an official complaint. The suspects have since been detained and assisting police in their investigations.

The government of Ghana had tightened human traffic as part of measures to prevent the spread of the deadly Coronavirus.

Dubbed, “Operation Covid Safety”, a joint police and military contingent has been deployed to affected areas to enforce the directive.

Parts of the national capital Accra, Kumasi, Kasoa and Tema have been affected by the directive. Some miscreants have, however, been exploiting the directive to perpetrate crime.