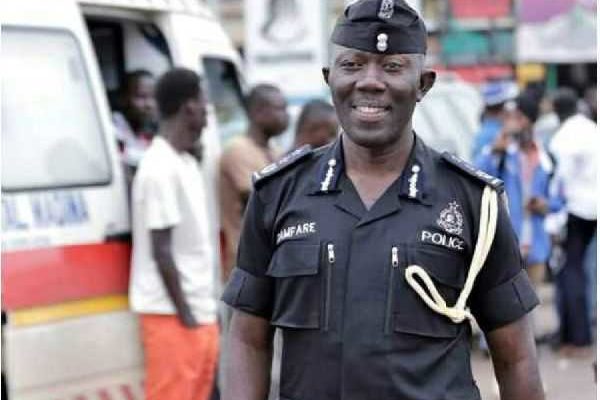 The new IGP officially took over the leadership of the Ghana Police Service (GPS) last Monday, and he the IGP together with the organisers of the demonstrators excelled in the way they ensured that yesterday’s demonstration in Accra ended successfully without any skirmishes.

The police were very professional and discharged their constitutional duties satisfactorily. This is what we expect our Police Service to do, always a friend to the citizenry, while ensuring the safety and security of the nation and everyone in it.

Dr Dampare is taking over the leadership of the Police Service at a time people’s perception of the service is mixed. Even though Ghana has been ranked among the most peaceful countries in the world, there is the issue of insecurity and high rate of crime in the country, as well as the perception of corruption among personnel of the Police Service.

It is for this reason that the nation expects the new IGP to come up with strategic policies that will enhance efficiency and effectiveness to reassure the populace that under his leadership, things will change for the better.

The Daily Graphic has no doubt that the IGP can deliver, considering his past experience through the ranks to the position of Commissioner of Police, where he supervised a number of innovative policies, including stopping table-top payments to policemen on duty and the Visibility Project of the service.

Many Ghanaians who have admired the IGP from afar, including those who have witnessed his professional operations on the streets and in fighting crime, therefore, expect much more from him as the acting IGP.

We expect enhanced and efficient service delivery under his leadership to guarantee the safety and well-being of the citizenry. The police desire to go about their duties without fear or worry that they will be attacked, robbed or maimed. This is where the Daily Graphic expects the new IGP to bring the expertise and experience of all personnel, both retired and in active service, on board.

It is important that he reaches out to everyone, as he cannot succeed without the support of the people he has ever worked with and those he continues to work with. As an IGP, no one expects him to be everywhere or hold himself as Director General of Operations, Director General of the Criminal Investigations Department, Director General of Police Intelligence, as well as regional police commander in the various regions.

We have mentioned these units because they are critical to the success of any IGP. It is equally true that Dr Dampare cannot succeed all by himself without the support and cooperation of the personnel and stakeholders.

For us the citizenry, we live with the criminals and the miscreants and the police would, therefore, require the timely flow of information on the criminals and their activities to enable the police to deal with crime. It is also expected that the police will keep the confidentiality of informants to win the confidence of such informants and members of society. Anything short of this will certainly compromise the reputation of the Ghana Police Service and the safety of the citizenry.

The IGP has risen through the ranks to the highest position and the Daily Graphic admonishes him to be mindful of the bootlickers and also turn his back on those he thinks are against him.

In this era of sophisticated crimes, Ghanaians want a proactive police service, the lead agency in internal security, to discharge their core mandate to maintain law and order and guarantee economic development and improved livelihoods. As the immediate past IGP admonished him, the new IGP should seek to unite in diversity and forge ahead for the good of the service and country. Any exclusion tendencies will not inure to his success as IGP.

It is good that the most senior Commissioner of Police (COP) has been appointed as IGP. This should serve as an encouragement and motivation to all service personnel to work to reach the top, as the future of the service rests on their shoulders.

As Mr James Oppong-Buanuh told serving officers his handing over address: “You really need to be dedicated and determined to take over the reins of the Ghana Police Service in the near future.”

The Daily Graphic equally congratulates Mr Isaac Kofi Egyir on his appointment as Director-General of the Ghana Prisons Service. The task ahead will not come easy. We are aware the Prisons Service is under-resourced. While we appeal for more resources for the service, we urge the leadership to be innovative in its operations to position it as a world-class institution.

The Daily Graphic wishes both Dr Dampare and Mr Egyir well in their new roles, bearing in mind that we will not hesitate to take them on if they disappoint the citizenry and the appointing authority.