I'm a fan of Patapaa, He is a testimony of God - Samini explains VGMA photo 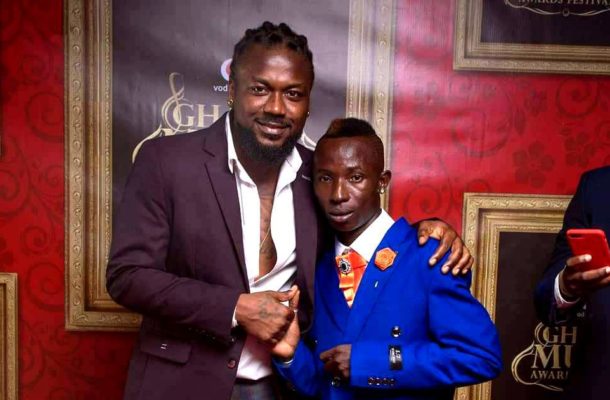 Samini (L) posing with Patapaa (R) at the VGMA

Multiple Award winning Ghanaian reggae/dancehall legend, Samini, has revealed that he is a huge fan of Swedru based musician, Patapaa.

According to the 'My Own' crooner, the rise of Patapaa is an indication of what God can do for anyone at any point in their lives.

Advising Ghanaians to desist from continuously mocking the ‘One Corner’ hitmaker, Samini stated that Patapaa will only be able to express his talent if he is supported by Ghanaians.

Speaking to Abeiku Santana on UTV’s Atuu, Samini stated that he decided to have photo shoot with Patapaa at the recently held VGMAs because he is a big fan of Patapaa.

When asked by the host, why he likes Patapaa, he answered; “I love surprise stories like that, and it proves that there’s a living God who blesses his children, when they are not even aware because nobody expected Patapaa to blow and now he’s going places”.

Samini in his interaction indicated that, revealed he got disappointed after Patapaa failed to win the Popular Song of the year at the 2018 VGMAs.

The ‘High Grade Family’ boss added that Patapaa’s ‘One Corner’ song was everywhere and even received massive airplay at a club in Brooklyn, USA where Black Americans were jamming to ‘One Corner’.