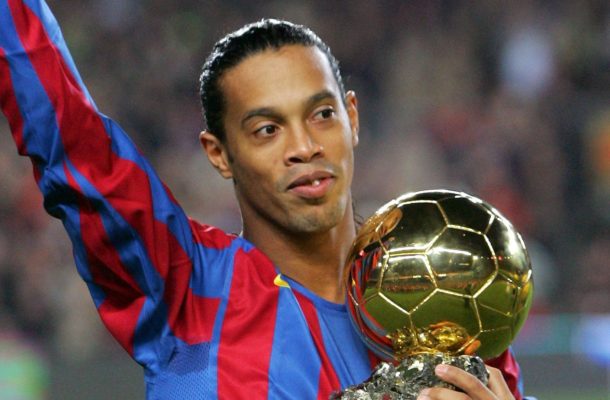 FIFA.com has compiled a number of quotes from interviews granted by some of the World's greatest footballers this week.

Below are  quotes from these footballers including Brazilian legend, Ronaldinho, Barcelona star, Lionel Messi amongst others.

“I’m world champion with Brazil [in 2018]. We have what it takes in the team. There is a big quality with players like Neymar and [Philippe] Coutinho. The new coach is also good. If we find ourselves as a team, we are among the favourites.” Bayern Munich winger Douglas Costa believes Brazil can win the 2018 FIFA World Cup Russia™ in an interview with Munich-based daily Abendzeitung.

“I’m old. I’m 36 years old, I’m not 26 anymore and I’m looking at what I want to do when I finish my career. The idea is to play for another year. I’m involved in new projects, related to music and football. As you know, they’re my two great passions. It was a dream life. I won everything,” Brazilian legend Ronaldinho hints he may soon hang up his boots following the opening of Barcelona’s new office in New York.

"I see that he doesn't like football that much so I leave it. I'm not the type to buy him footballs or force him. [But] now the club has started something for the children and we'll see if he gets hooked. He wants to win at everything. I also like to win, so I don't let him. Even when we climb the stairs and he wins, he makes sure to tell me." Barcelona star Lionel Messi talks with Argentinian comedian Mingo on Telefe's 'Polemica en el bar' about his son

"I'm going to a Justin Bieber concert on my birthday. I just got them [tickets] actually, so I'm excited." Midfielder Christian Pulisic tells reporters his 18th birthday plans after USA's 4-0 rout of Trinidad and Tobago in World Cup qualifying. Pulisic became USA's youngest ever player to start in a World Cup qualifier in that match.

“I had the privilege and the luck of having him in my life. I am very grateful because he looked after me. We also had plenty of arguments because he acknowledged my opinion—even if Johan always wanted to be right. He was like a genius kid of 12 who had to go to university because he was cleverer than the professors. He was thinking so many steps ahead that, for many people, it was almost difficult to follow. Johan was unique." Former AC Milan and Netherlands star Ruud Gullit tells The Guardian about his relationship with the late Johan Cruyff.

"Ronaldo is a player of his time, the problem is that there is another who has been pretty much the best player in history. Ronaldo is extraordinary but compared to Messi, for me and for everyone who likes football, there can be no comparisons. Messi will be number one until he wants [to stop]. He's superior to everyone and is the best in the world, unless you are Real Madrid." 2010 World Cup winner Xavi tells Marca why former Barcelona team-mate Lionel Messi remains the best player in world football in his opinion.

"He is the Messi among the goalkeepers. Someday, I will tell my children that I have played together with Neuer. He is actually a football legend." Germany and Wolfsburg striker Mario Gomez on new national team captain Manuel Neuer, in an interview with Kicker.

"Antoine knows he's in a wonderful club, a club that grows up every day, a club that has given him the chance to be the player he is, and in this club he has found a coach who loves him, team-mates that have given him the chance to develop all his talent. In my opinion, he's destined to become a Messi, a Ronaldo, one of the best players in the world." Atletico Madrid head coach Diego Simeone believes his star forward Antoine Griezmann can be one of the best, speaking with reporters at the launch of his new book.

"We want to win everything. If I had to decide between Bundesliga and Champions League, I would choose the Champions League because it's a bit more special, even if the Bundesliga is a great thing. I hope we will win all the titles this season." Franck Ribery tells Goal.com that the UEFA Champions League is the title he desires most to win with Bayern Munich.

“Conte puts trust in his players and now we are good after an ugly season last year. I’ve always been the same player, but Conte knows how to treat players, having played at the highest level himself.” Belgium playmaker Eden Hazard reveals to the Daily Mirror how life has been under new Chelsea manager Antonio Conte.

"In the two years at Juventus, I learned so much about what I should not do when I was in Madrid: get onto the pitch anxious to try to prove everything in a few minutes. Since that first experience in Madrid, I have grown so much. [Fernando] Morientes, who was my idol, he told me that I had to leave and then return. I listened to him and I did well. It is clear that if I had gone to another team, I would have played more, but Real is my dream and I want to try to make it happen." Spain forward Alvaro Morata tells Gazzetta dello Sport that he is ready to fight for a starting spot in his second spell with Real Madrid.

"There's no doubt, nobody can argue that Manchester United is not the biggest club in the world. It is. It's the club with the most fans, supporters and there are numbers out there which are official numbers so you can't argue that. But is it the best club in the world? It hasn't been for three years, it hasn't been even anywhere near the best club in England. Manchester City have been there or thereabouts, so you can argue that they are the bigger club in Manchester at the moment in terms of results. But in terms of popularity, they've got no chance of being anywhere near the biggest in the world." Ahead of this weekend’s Manchester Derby, former Denmark goalkeeper Peter Schmeichel compares the global standing of his old club Manchester United and their local rivals Manchester City in an interview with Omnisport.

“Since my retirement, I have remained in close contact with many of the staff and players on the [LA] Galaxy. I spoke with some of them and they jokingly asked if I was ready to make a return to the field to help fill some of the void left by injuries and departures. I reminded them that I haven’t played a meaningful soccer game in almost two years and I certainly couldn’t fill the holes left by those players. Over the ensuing days, I began to think about their inquiries and it struck me that perhaps this is something I should consider.” Former USA international Landon Donovan reveals on his Facebook page why he made the decision to come out of retirement and re-join his former club LA Galaxy for the remainder of the 2016 Major League Soccer season.

"Pep knows how to adapt and I'm sure he'll do so in England. He's also got staff like Mikel Arteta who'll help that process, who know the league. City have signed well and have a very competitive squad. I know Nolito well because he was a team-mate here at Barcelona and with Spain. He's had a great start and hopefully can continue. I've admired David Silva for years: I think he's exceptional. Players learn day-to-day, from experience, team-mates and managers. I learnt a lot with Pep; he helped me to improve and he'll do the same at City.” In an extensive interview with The Guardian, Barcelona playmaker Andres Iniestabelieves his former coach Pep Guardiola will be a success at Manchester City.