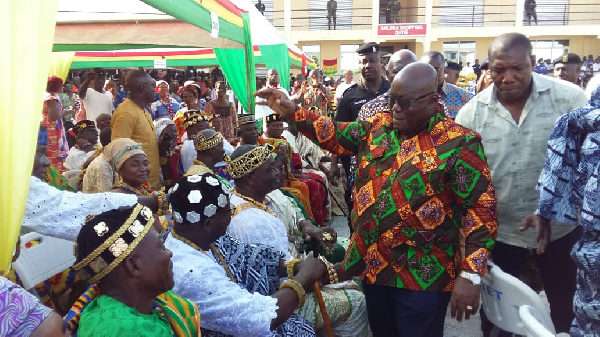 President Nana Addo Dankwa Akufo-Addo on Monday kick-started his three-day working visit of the Volta region, with the inauguration of the Anloga shopping Centre in the Keta municipality.

The Gh¢2.5 million facility, which comprises, 26 shops, two banking halls, a cafeteria and other ancillary facilities, was started under the erstwhile Mahama government and completed by the present administration.

President Akufo-Addo, speaking at the inauguration ceremony indicated that, his government was committed to completing all unfinished projects of the previous government to the benefit Ghanaians.

He stated that, phase one of the project was done in the era of the previous National Democratic Congress (NDC) government and his government came to complete the phase two of it.

The president thus, emphasized that, "I am not stealing NDC policies" but only commissioning Ghanaian projects."

He further noted that, his government was taking steps to complete the sea defense project in the municipality and would soon, also cut sod for the commencement of the Harbour project at Kedzi.

The Awomefia of Anlo, Torgbui Sri III, who joined the president in inaugurating the edifice, lauded the government's flagship policies to transform the country and urged him to bring to fruition the much touted one district, one factory programme in order to create jobs for the teeming unemployed youth.

President Akufo-Addo as part of his tour, also commissioned the 'Courage Quarshigah' Memorial hostel for the Keta Nursing and Midwifery Training College.

The presidential entourage, which earlier had a closed door meeting with the Awomefia, was scheduled to meet traditional leaders in southern, central and northern parts of the region in separate durbars at Tadzewu, Hohoe and Dambai respectively.