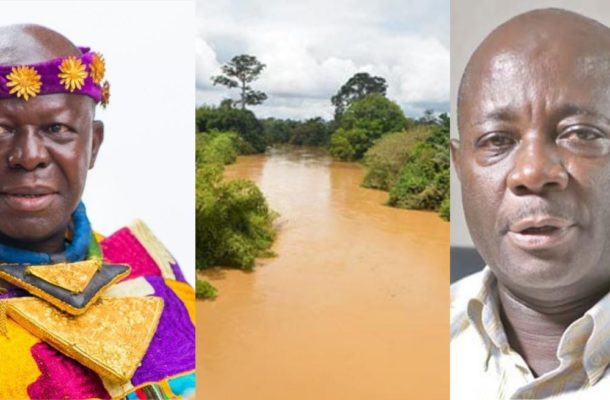 After making defamatory remarks about the Asantehene, His Royal Majesty Otumfuo Osei Tutu II, regarding illegal mining activities (galamsey) in the Ashanti Region, the founder and leader of the United Progressive Party (UPP), Mr. Akwasi Addai, commonly known as Odike, has offered an unequivocal apology to the revered king.

It will be recalled that Mr. Akwasi Odike recently criticized Otumfuo for failing to take a proactive role in the fight against galamsey in the area while speaking on Kumasi-based Oyerepa FM.

Odike emphasized that Otumfuo has remained mute as the region's indiscriminate mining operations continue. He claimed that this was severely harming the Ashanti Region's farmland, forests, and water resources.

He asserted that some traditional leaders in Manhyia are allegedly complicit in illicit mining activities, which is why they have all remained mute and placing the blame on politicians. He wondered what kind of account Otumfuo will render to his forefathers when he die someday.

Unafraid Odike challenged Manhyia to confront the galamsey head-on and combat it, or else he would organize the young to protest against them.

“Mine is addressed to Manhyia and Otumfuo Osei Tutu II, who sits on the Golden Stool. Please pay attention if Nana is listening. We were left with undamaged fields and water bodies by your ancestors, Sir Osei Agyemang Prempeh and others. What account are you going to give Sir Osei Agyemang Prempeh when you pass away, Nana, considering the way you want us to lose our woods and water bodies to galamsey?

“I'll organize a protest against you if Manhyia doesn't rise. If you don't become involved, we would where we are. We have learned of Manhyia's involvement so I will organize the youth of Ashanti to express our anger. We have complained countless times, yet whenever you have the chance to address it, you place the blame on the politicians. That is untrue; I'm here to tell you that Manhyia has a hand in it. Come forth and clarify how you can't be considered a part,” he criticized.

However, Odike's remarks incensed the Kumasi Traditional Council, who had rituals at Manhyia conducted to expel Odike from the area, with claims that he wanted to rebel against Otumfuo Osei Tutu II and the entire Ashanti Kingdom.

The rites, which also involved the killing of a live ram and the pouring of libations, were intended to call upon the Ashanti gods to punish Odike for his rebellion remarks.

But when Mr. Kwasi Addai 'Odike' appeared on Onua TV's Maakye morning show, on Monday, September 12, 2022, he apologized and retracted his remarks about the Asantehene.

On the show Ghanaguardian.com was watching, he remarked, "Nana, whichever way you have been offended with the comments, I rescind and apologize."

Odike was hastened to add that he would keep telling the truth up until the time Ashanti Region's unlawful mining is stopped.