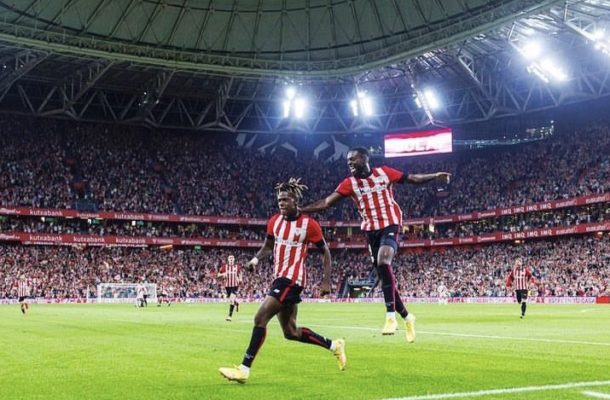 Black Stars striker Inaki Williams scored his third goal of the season in his side's match against Almeria on Friday night after returning from the International break.

The striker did not only score but also provided an assist for his younger brother Nico Williams as they defeated Almeria 4-0 in a rampant display.

Athletico Bilbao was quick of the blocks as the Williams brother quickly combined for the opening goal in the 9th minute.

Iñaki Williams headed home from the center of the box to the bottom left corner as he was provided with a cross by his younger brother Nico Williams.

The Basque side quickly turned the screw as they made it 2-0 in the 16th minute with a clinical finish.

After recess, Inaki Williams though he had scored his second of the night but a close VAR decision overturned the goal for a marginal offside.

Nico Williams scored the third goal with an assist from his elder brother Inaki Williams as his deft touch took him away from the defender before prodding home past the Almeria goalkeeper.

De Vesga won a late penalty in the 83rd minute and effected it as he placed the ball in the corner to make it 4-0.