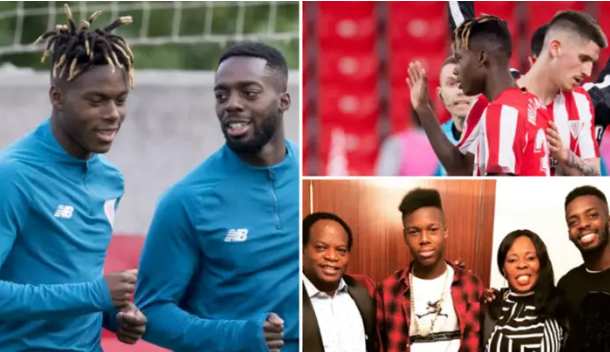 Athletic Bilbao striker Iñaki Williams told The Guardian about the hard journey his parents went through to get to Spain, in search of a better life with more opportunities than in Ghana, where they come from. The attacker said that his parents had to cross " the desert barefoot to reach Spain ." "He ate me up," said the '9' when they told him the whole story in an interview in the English newspaper 'The Guardian'.

"You watched the news and you saw ships arriving from Africa, people climbing the fence from Melilla and I realized that I really didn't know how we got to Spain. It's something I always asked, but my mom avoided it because I was just a kid. And maybe then he thought that if he had told me when I started in Athletic at 18, it would have been a weight on my back . I knew my life was different from my friends and I could imagine it, but when you hear the details ..." he commented. The Williams family is from Navarra by adoption and Nico was even born in Pamplona, ​​kicking the ball for the first time in the Osasuna quarry.

"They set off in a truck, one of those with the back open, 40 people packed up, then they walked for days," Williams continued. " People fell, they went down the road, people they buried. It's dangerous: there are thieves waiting, rapes, suffering. Some are cheated. The traffickers get paid and then halfway they say: "The journey ends here" Throw you out, leave you with nothing: no water, no food. Children, the elderly, women, "he said, putting himself in the shoes of his parents, who still suffered one last setback on their arrival in Spain.

"They arrived in Melilla, they climbed the fence and the civil guard stopped them. They had no papers and they came as immigrants, so they send you back. When they were in jail, a Caritas lawyer who spoke English said: " The only thing you can try is Tell them you are from a country at war . They tore up their Ghanaian papers and said they were from Liberia to apply for political asylum. Thanks to him we came to Bilbao", she said. Shortly after arriving and giving birth to Iñaki, they left for Pamplona, ​​where they stayed for several years, growing up the eldest of the Williams and where his brother Nico, now a Spanish international, was born.

Iñaki Williams, who has just made a record 206 consecutive games with Athletic in LaLiga, has the moral duty to give back to his family everything they sacrificed for him and his brother by giving them a more stable and comfortable life. It is his main goal at the head of the forward of the Bilbao team. "Listening to my parents' story makes you want to fight even harder to give back everything they sacrificed for us. I could never repay them, they risked their lives, but the life I'm trying to give them is the one they dreamed of giving us. And, somehow , we can say, 'We've done it,'" he said.