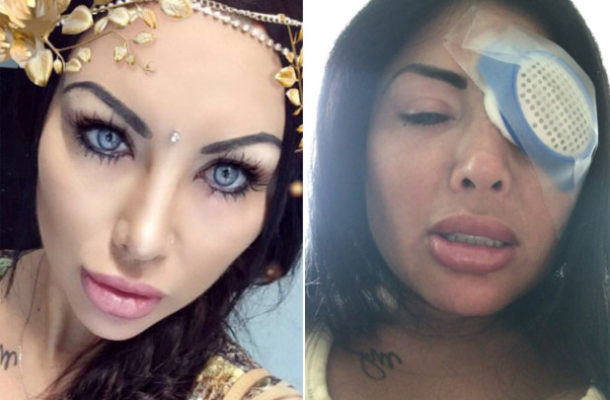 Nadinne Bruna, a 32-year-old Instagram model who has more than a million followers, has the eyesight of a 90-year-old after undergoing a controversial procedure: She had silicone implanted in her peepers to change her eye color from brown to light gray.

“Before this surgery, my eyes were completely healthy,” Bruna, who’s based in Miami, tells South West News Service. “My pupils, they can’t adjust to light anymore, so I’m very photosensitive now too. This surgery completely f–ked up my life.”

Retinal implants are illegal to perform in the United States and not approved by the FDA. Ophthalmologists say that they can cause irreparable damage.

“The implants interfere with normal fluid leaving the eyes, which causes scarring, increases pressure and damages the nerves permanently,” Dr. Richard Rosen, retina surgeon at the New York Eye and Ear Infirmary of Mount Sinai, tells The Post. And he’s heard of Americans going to Central and South America to have the procedure. “There are definitely some patients I’ve seen that do OK with them, but I’ve also seen some real disasters.”

It was a risk that Bruna was willing to take. In September 2016, she flew to Bogota, Colombia, to have the procedure, where she was charged a discounted rate of $3,000 in exchange for posting her results on Instagram.

But the procedure damaged her optic nerves, and she ended up with glaucoma, an incurable eye condition that can gradually cause blindness. On top of that, her eyes were constantly red and itchy for a year, and she had to stop booking modeling jobs because of her condition.


“I make most of my money through my Instagram account and I couldn’t do photo shoots,” she says. “I’ve been living on my savings.”

She had the implants removed in Miami in September, but the damage was already done.

“Nadinne’s eye problems are something she will have to deal with for the rest of her life. She’s never going to be done with it,” ophthalmologist Dr. Ranya Habash, who performed the implant-removal surgery on Bruna at Bascom Palmer Eye Institute, tells the Daily Mail.

Dr. Eugenio Cabrera, the Colombian doctor who performed the surgery, did not comment on the procedure.

If you want to switch up your eye color without destroying your vision, Rosen suggests colored contact lenses.

“They’re safe, approved and you can take them out,” Rosen says.

Ultimately, the surgical nightmare was a learning moment for Bruna.

“I was completely stupid. I trusted the wrong person,” she says. “I don’t think surgeries are bad. I just didn’t know the risks and I made a mistake by not doing my research.”