Involve us in galamsey fight - Ghana Institution of Surveyors' plea 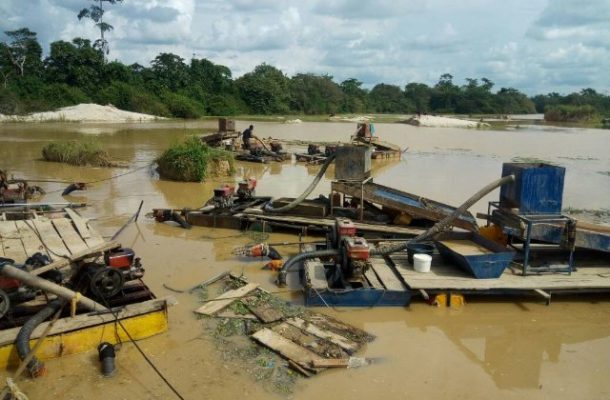 A piece of news that shocked me last week as far as our national fight to uproot illegal mining, also known as Galamsey, was a statement by the Ghana Institution of Surveyors (GhIS) through their President.

It shocked me because Galamsey is one of the worse self-inflicted evils on a nation by its own. I can be likened to a virus and yet, we have allowed it to fester. I am passionate for its uproot because of its likely damage for generations unborn.

At a media interaction held as part of activities to mark the 15th has the capacity to fight illegal mining activities happening indiscriminately Surveyors Week, Maame Ama Edumadze-Acquah, President of GhIS, said the Institution across the country. Really?

According to her, the Institution has not only the capacity but, in addition, all the required tools to eradicate the Galamsey menace. The worry, however, she said, is that the government was not involving them in the fight.  The keywords here are: “to eradicate” and not just minimise.

This sounds totally intriguing, does it not? That a whole Institution of reputable professionals as members are claiming that they have the capacity to eradicate a menace that is killing our environment and destroying water bodies and they are not being involved in the fight? Can a government that from day one of its inceptions swore to bring an end to illegal mining in this country watch on for such boldly declared help to elude them?

Did we not give a thumps up and a thunderous applause when the fight against Galamsey was launched some three years ago in view of the degree of degradation that illegal mining was causing our environment? Why would we turn a deaf ear to one of our own professional bodies who are claiming they have the panacea to our problem?

If what one is hearing from the Institution is true, then it sounds rather bizarre on the part of powers that be. Bizarre because a problem that has led a head of state to put his job on the line to fight against should be opened to every positive idea from corporate bodies or individuals who have the potential to assist in the cause. It is also mind-boggling that the claim of the Institution has also not crossed the mind of the inter-Ministerial Committee on illegal mining? What is going on here?

The entire nation’s sleepless nights on the destruction of our water bodies, farms, the environment and communities by illegal miners should definitely come to an end. So far, there seems to be no immediate end in sight if what one saw happening in deep forest areas in the Ashanti Region quite recently in the media is anything to go by. And that is why one should worry if indeed it is true that the government does not want to involve GhIS in the fight. It is a sad commentary on the tireless efforts by the Media Coalition against Galamsey, civil societies, individual citizens and communities to work to stop the canker.

At the recent media encounter, the GhIS contended that it had the technologies to easily track down illegal miners who have moved into the thickest part of our forests to mine and thus making it difficult to detect them. If someone offers such a huge solution to a challenging problem, at worse, you would get curious, search their background to see their capabilities, if you have to, and then engage.

Galamsey is certainly a gargantuan challenge for our country. It is a selfish and deliberate action of insensitivity and bad citizenship where the few engaged in it are holding a whole nation and its future generations to ransom. If an institution claims they have all there is to stump it out, should we not embrace it, test and see?

Galamsey has remained a deadly poison with recent media reports showing that counter antidotes are proving non-efficacious. Maybe, it is time now to listen to GhIS and see how much they can also do to help the situation.

They have their integrity to protect as a credible professional body. They would not say yes if they meant no. Let somebody involve them. Let us engage and get them to step out so we can all testify to their claims. After all, nothing ventured is nothing gained.