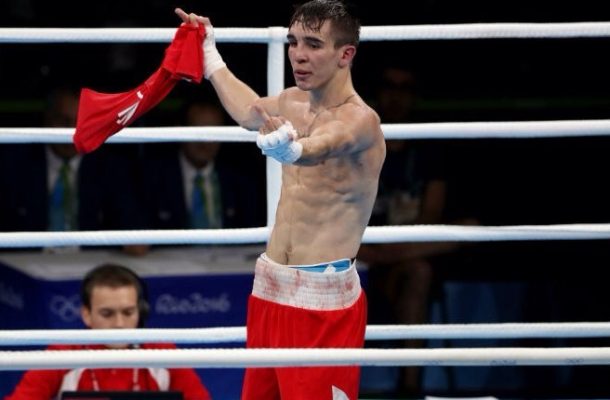 IRISH boxer Michael Conlan has launched an astonishing middle finger attack on judges at Rio 2016 and personally contacted Vladimir Putin demanding some answers after his controversial defeat to a Russian opponent.

In an abuse-laden tirade after his defeat to Vladamir Nikitin, Conlan implied that the Russian president had paid bribes to the judges to ensure the victory for his opponent.

Despite dominating in his bout with Russia’s Nikitin, the Irish amateur world champion accused Olympic boxing of corruption as the sport was embroiled in fresh controversy barely 12 hours after a Russian was booed to the Rio podium.

“How much did they charge you bro” Conlan tweeted to Putin.

Hey Vlad @PutinRF_Eng
How much did they charge you bro?? @AIBA_Boxing #Rio2016 ?

Conlan, who won bronze at London 2012, held nothing back in a post fight interview, laden with expletives and accusations of cheating.

“I will never box for them again,” Conlan said. “They’re cheating b*******, they’re paying everybody.

“I don’t give a f*** about swearing on TV. I’m here to win Olympic gold and my dream has been shattered.


“But you know what, I’ve got a great career ahead of me, but they [AIBA] are known for being cheats and they’ll always be cheats.

“Amateur boxing stinks from the core right to the top.”

The International Boxing Association (AIBA) has vehemently rejected the claims after the surprise unanimous points decision.
“Michael is a current world champion and he came here with high expectations,” said an AIBA spokesman said.

“His disappointment is massive, we can all understand that. It’s his personal judgment.

“AIBA is striving for a fair, level-playing field. The idea is not to benefit one country towards another. We represent 200 national federations.

“These statement are foundress, but he’s free to have his opinion.”