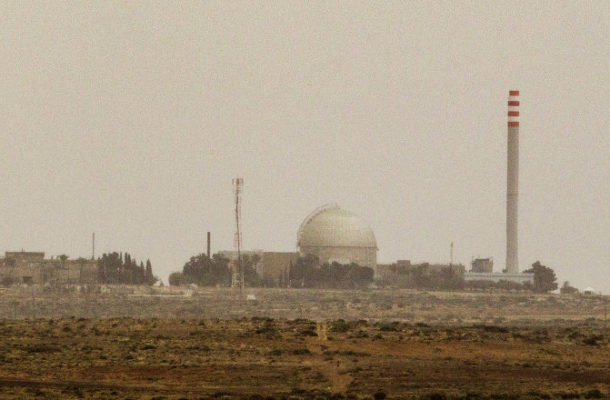 Israel's longstanding policy has been to neither admit nor deny that the country has nuclear weapons. However, estimates by reputable intelligence companies suggest the country has between 80 and 400 nuclear warheads, making it the only nuclear-armed state in the Middle East.

Tel Aviv began work on the Dimona nuclear reactor in 1958 without informing members of the government or the country's parliament, Israeli historian and Haaretz contributor Adam Raz revealed, citing a trove of primary documents he reportedly received from a secret source at an academic event.
The papers, which include notes, memorandums, drafts and summaries by senior Israeli officials of the time, including Israel Galili, an adviser to prime ministers Levi Eshkol and Golda Meir, Eshkol himself, cabinet member Yigal Allon and IDF commander Moshe Dayan, defence chief-turned prime minister Shimon Peres, and senior diplomat Abba Eban, helped Raz piece together important details about the clandestine project. Moral Qualms and Cost Concerns

The papers revealed that Galili had several concerns about the nuclear endeavour, known as "the enterprise," including its potential to undermine Israel's "moral status," or cause then-Egyptian President Gamal Abdel Nasser to attack Israel to try to take out a "justified target." Finally, he feared that the program could incite Cairo to start work on its own nuclear program.

©
AFP 2018 / Jack GUEZ Netanyahu Asked for Trump's Support Ahead of Raid on Iran's Nuke Archive, Israeli Media Claims
The documents also indicated that the cost of the Dimona reactor, estimated at about $53 million by Peres in April 1962, was revised upwards by Alon to "three times" the $60 million discussed by the cabinet in 1964. An undated note, presumably written sometime between 1963 and 1966, indicated that the real cost may have been as much as $340 million (about $2.7 5 billion in present day dollars, accounting for inflation). "
If it were known in advance that it would cost $340 million – would we have voted for Dimona?" the note, written by Eban to Galili, reads. Meir Proposes Switching From Defence to Offence The documents showed that after Eshkol succeeded David Ben-Gurion as prime minister in 1963, the new PM's foreign minister, Golda Meir, proposed admitting the existence of the program in a bid to get support from America's Jews.
"Our situation will be stronger when the struggle becomes public," she insisted, adding the need to "switch to offence instead of defence."

Interestingly, the papers reportedly show that Israeli leaders had to resist pressures to place the project under international supervision, not only from Charles de Gaulle of France, but even from the Kennedy, Johnson and Nixon administrations, who urged Israel to sign on to the non-Proliferation Treaty, which was being developed at the time. In one memo, Peres reportedly told Galili that "in order to overcome the supervision [that the US wanted], cooperation by both sides is needed." Nuclear Status Undefined

©
AP Photo / Alfonso Perez Tehran Blasts US 'Iranian Chemical Weapons' Claims, Recalls US, Israeli Programs
One particularly important note, again by Galili, seems to indicate that even several years into the reactor's construction, Tel Aviv did not commit to building actual nuclear bombs. "There is no decision by the government of Israel to manufacture atomic weapons," the note says.

In another bombshell document cited by Raz, Yigal Allon refers to a phraseology agreed between himself and Nixon Secretary of State Henry Kissinger, whereby a nuclear state is defined as "a state that has exploded a bomb or a device." This definition allowed the US not to classify Israel as a nuclear state subject to the NPT.

"I am constantly using a phrase agreed with Kissinger — that Israel is not a nuclear state," Allon wrote in one of the papers. Nuclear Option in 1973

Ex-IDF General Reveals Israeli Army's Deepest Secret
Finally, without providing any direct quotations from the documents, Raz noted that the subject of the possible use of nuclear weapons during the 1973 Yom Kippur War, in which Israel came dangerously close to defeat at the hands of Egypt and Syria, was also discussed in the papers. In brief, Raz confirmed that Defence Minister Dayan had arrived at defence headquarters in Tel Aviv on the afternoon of 8 October 1973 to recommend preparations to activate the nuclear option.
On October 9, Meir told Israeli Atomic Energy Commission Chief Shalhevet Freier that preparations would not be made without her explicit authorisation. Israel Lior, Meir's military secretary, similarly indicated to Dayan and Freier that the nuclear option was a no-go.
Citing censorship, Raz indicated that the information he provided addresses "only a small portion of the subject that came up in the notes," and urged Israeli authorities to allow for a more open discussion of the country's nuclear program.Source: sputniknews.com