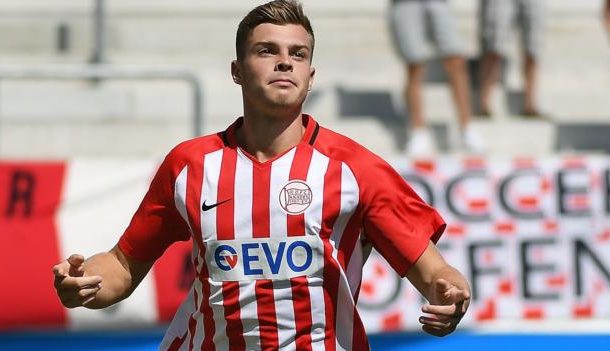 Young English footballers thriving in Germany has been one of the stories of the season so far.
Jadon Sancho and Reiss Nelson, who have become key players at Borussia Dortmund and Hoffenheim respectively, have earned plenty of headlines already.
But dig a little deeper, and you'll find another intriguing example of the same phenomenon.

Tucked away in the fourth division is Jake Hirst, Germany's top-scoring Englishman, a player whose career was almost cut short by artificial pitches but whose name is now chanted from the stands.
"Jake Hirst's on fire," is what you'll hear supporters of Kickers Offenbach sing, just a few months after some questioned his arrival from the lower reaches of German non-league football.
"At the beginning when people heard where I was coming from a lot of people were doubting the decision of the club and thinking 'What are you going to do with him?'" Hirst says.
"Proving them wrong is a nice feeling."
Born in Germany to parents from Yorkshire, Hirst has 10 goals in his first 18 games for Kickers Offenbach in the Regionalliga Sudwest.
By the end of his fourth appearance, he already had five goals to his name and was a firm fans' favourite.
The chant directed at him is a rework of the song made famous by Wigan Athletic and Northern Ireland fans for their goalscorer Will Grigg.
"It's a nice feeling to hear it, of course. It's always after I've scored or after we've won. I think it first happened after my third or fourth match because I scored in each one," he recalls.
And it might never have happened, all because of an artificial pitch.
Growing pains almost end a career
Hirst was part of the Eintracht Frankfurt youth system as a teenager but suffered from growing pains in both knees and was increasingly unable to play on the academy training surface, which contributed to him being released at 15.
Spells at FSV Frankfurt and TSG Wieseck followed, before Hirst was then forced to rebuild his career at a much lower level.
"I was off the radar [of bigger clubs] because of the problems with my knees. I lost track of it and then I was down in the lower leagues. There was no scouting going on down there. I was just playing local football and nobody really comes to watch," says the striker.


Hirst had been working at his parents' tennis academy before moving to Offenbach"Then Offenbach just gave me a call and asked if I wanted to come for a day's training. They asked me to stay for the week. I did that week and it just panned out that way."
Hirst's parents, David and Beverley, were semi-professional tennis players and originally moved to Germany 30 years ago in search of greater opportunities. In 1994 they founded their own tennis school, where Jake worked as a coach until this summer.
Despite being born and raised 25 miles away from Offenbach, in a town just north of Frankfurt called Bad Nauheim, he went to kindergarten without knowing a word of German. Now he speaks German and English fluently - both with a noticeable Yorkshire accent - and admits that, if anything, he's a little more comfortable in the language of his adopted home country.
German or English?
He struggles to decide which nationality he identifies most strongly with, having spent his whole life in Germany, but there's no doubting where his loyalties lie when it comes to football.
"England for definite. I don't know why, that's just the way it is. I just like England."
Hirst has always had a British passport, but could take up dual nationality to help Offenbach comply with league regulations.
"There's a rule here that you have to have four under-23 players with a German passport in every squad. We're short of those so I'm getting one to make it easier for the club," he explains.
So far he's been a revelation, and wants to build on his positive impact in the second half of the season. After a slow start, during which they picked up just two points from their opening four games, Offenbach went into the winter break in fourth place and are eyeing promotion.
For Hirst, whose one-year deal will expire at the end of June, there is much to consider. Discussions are ongoing about a new contract, and even though the club don't return to full-time training until the middle of January, like all the players he has a personal programme to stick to during the holidays.
"We've got a few weeks off. We're going back home to England over Christmas and then flying back to Germany before new year. It's nothing special, just Christmas with the family as usual. We'll be at my grandma's house in Huddersfield," he says.
With the exception of Jake, his sister, and their parents, the rest of the family remain in England. Christmas is a rare chance for them to come together, and maybe take in a game at Oakwell with his father, who's a big Barnsley fan.
A keen follower of English football, perhaps Hirst could be playing there one day?
"Long term I just want to see where the journey goes and give it my best shot. I want to play at the highest level possible but we'll see what happens," he says.Source: bbc.com