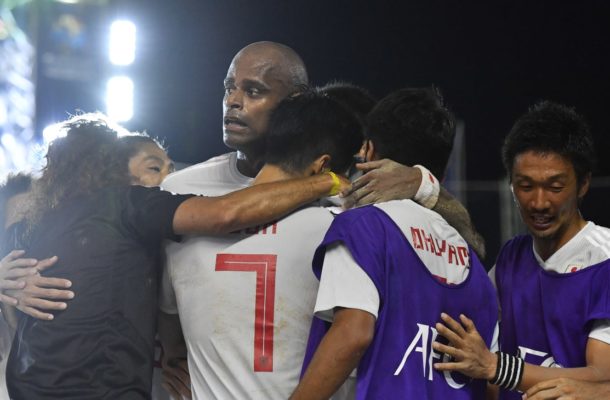 Pattaya: Japan cruised into the AFC Beach Soccer Championship Thailand 2019 final with a 6-0 win over Palestine on Friday, with the result also securing their place at a tenth consecutive FIFA Beach Soccer World Cup.


Ruy Ramos' men set up a meeting with the United Arab Emirates in Sunday's final, after Ozu Moreira scored two thumping free-kicks to help eliminate the previously unbeaten West Asian side from the Asian title race.

Palestine can, however, still advance to the global Finals in Paraguay with a win against Oman in the third place play-off, also on Sunday.

Fresh from his two-goal star turn in Japan's quarter-final win over Islamic Republic of Iran, Takuya Akaguma continued from where he left off, powering his side into the lead with a fantastic strike on the turn in the sixth minute.

Shusei Yamauchi then brought a fine save from goalkeeper Fady Jaber a minute later, and Takaaki Oba hit the post with an overhead kick, but Palestine continued to fight, and had a reasonable chance of their own through Mahmoud Al Neirab.

Jaber continued to block Japanese attempts, including an impressive volley on the run from Moreira, but there was little he could do to stop the 33-year-old star from firing in an absolutely superb long-range free-kick to double the lead with just 25 seconds left in the opening period.

Japan extended the lead further in the second minute of the second period, with Oba finding the roof of the net after being supplied by Yamauchi in a move that would have been brilliant on manicured grass, let alone sand.

Japan had a fantastic chance to score a fourth, this time from a Masanori Okuyama dead ball effort, but Jaber made another top save, before Al Neirab squandered a major opportunity for Palestine when he missed a penalty to leave them adrift, but with a flicker of hope at 3-0 down with 12 minutes remaining.

Mohamed Al Sdudi saw red for the second time in the tournament for a foul on Akaguma, but the in-form Japan player sent his spot-kick crashing into the crossbar, before Jaber denied a lunging Yamauchi strike, as Palestine rode out the two minutes of numerical disadvantage without conceding any goals.

Palestine fought valiantly, but couldn't make any inroads on their deficit and another bullet of a free-kick from Moreira - his eighth goal of the tournament - made it 4-0 with six minutes remaining.

Yamuichi put the icing on the cake when he slammed home a fifth in the 35th minute to join Moreira on top of the scoring charts, and Naoya Matsuo scored with two seconds remaining as Japan celebrated yet another World Cup qualification.
Ruy Ramos, Japan head coach

"I'm not satisfied at all. We just the win the game, and that's it. In the games we played against Kuwait and Bahrain I thought the problem was the players were under pressure, but today I found out the players were only satisfied to go to the World Cup. We're aiming for a better level of performance than that."

"Japan's team is very strong and good. All their players have good experience. We did our best to play better and try to win this match, but there is a big difference between the level of the players from each team. Now we are looking for a win in the next match. We still hope to qualify for the World Cup."Source: the-afc.com