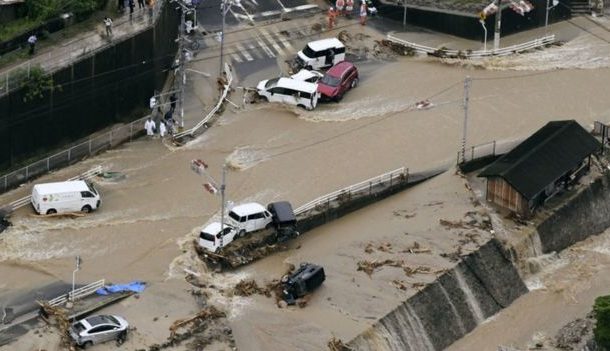 Flooding and landslides have killed at least 38 people and left dozens missing in western areas of Japan.
Most of the deaths have occurred in Hiroshima prefecture, which has been hit by torrential rain since Thursday. Hundreds of homes have been damaged.

About 1.5 million people have been ordered to leave their homes and three million more advised to do so.

Thousands of police, firefighters and soldiers are taking part in search-and-rescue operations.

Some of the victims have been buried alive by landslides, Japan’s Kyodo news agency reports.

In the town of Motoyama, about 600km (370 miles) west of the capital Tokyo, 583mm (23in) of rain fell between Friday morning and Saturday morning, Japan’s meteorological agency said.

More rain is expected over the next few days.

Kyoto, about 300km to the east of Hiroshima, has also been hit by downpours. Local resident Manabu Takeshita told the Japan Times website: “Anybody living near the river has got to be nervous because typhoon season is just really starting.”