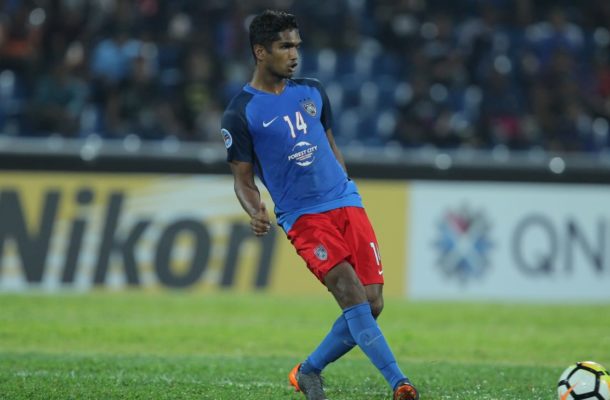 Johor: Johor Darul Ta'zim (JDT) captain Hariss Harun has admitted that he can’t wait for his side's debut AFC Champions League campaign to get underway as the Malaysian team get set to face holders Kashima Antlers in Group E at Kashima Soccer Stadium on Tuesday.


After exiting in the qualifying rounds in each of the past four years, Johor have finally realised their ambition of joining the Continent’s elite in Asia’s premier club competition, with the 2018 Malaysia Super League champions gaining automatic entry into the 2019 group stage.

And they could have been given no tougher introduction than at the home of the defending champions Kashima, who eased past Australia’s Newcastle Jets 4-1 in the play-off round to qualify for the group stage.

“I think it’s very exciting, we’re really looking forward to the AFC Champions League and it’s going to be a big challenge for us,” said the Singaporean international, whose side will also face China’s Shandong Luneng and Korea Republic’s Gyeongnam FC in the group stage.

“We have been drawn against some of the best teams in Asia, but we want to test ourselves against these sides as it is the best way to improve as a team.

“Kashima are the defending champions so this is a really, really big test and we are looking forward to playing against players who have experience of playing at the top level of Asian football.”

A post shared by JOHOR DARUL TA’ZIM FC (@officialjohor) on Feb 26, 2019 at 10:52pm PST Hariss joined Johor ahead of the 2014 season and has since won multiple league and cup titles, while arguably his greatest success came in 2015 when he was part of the side that won the AFC Cup.

But Johor have found making the step up to the AFC Champions League a difficult one and have fallen in the qualifying rounds for the tournament in four successive years.

A rise in Malaysia’s co-efficient ranking, however, meant for the first time the Southeast Asian country’s champions were afforded automatic entry and, for Johor, this offers them the opportunity to move to the next level.

“Playing in the AFC Cup was a good challenge for us in the past few years and it was a fantastic feeling to win the tournament in 2015,” recalled the 28-year-old.

“But it’s very important for this club to make the step up and play at the highest level, and here we are now … mixing it with the big boys.

“We hope to play in a lot more AFC Champions League campaigns in the future, but we need to start off well and make a good impression in this year’s campaign, and hopefully this can set the tone for the future.”

In a sign of Johor’s elevated status on the Continent, the side from southern Malaysia acquired Diogo from Buriram United ahead of the 2019 season.

A post shared by Diogo Luis Santo (@diogoluis_santo) on Feb 8, 2019 at 5:32pm PST The Brazilian striker was prolific during his time in Thailand, scoring more than 100 goals for the club, including on his last visit to Japan, against Cerezo Osako in the 2018 group stage.

“His experience of the AFC Champions League will be an important asset for the team in the 2019 campaign.”