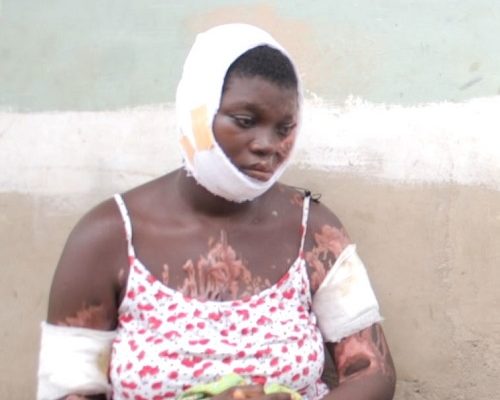 In front of an unpainted house in Kwabenya, a suburb of Accra is 25-year-old Grace Amezando, seated with her head wrapped in a gauze sponge ostensibly to hide her pinna dissolved by acid after she was attacked.

Her two hands are sored and putrefying, discharging foul-smelling pus.

The skin on the left side of her face and chest are blotched.

She has been disfigured by her jealous boyfriend, Bright Bosso, who did not hesitate to throw acid on her face. 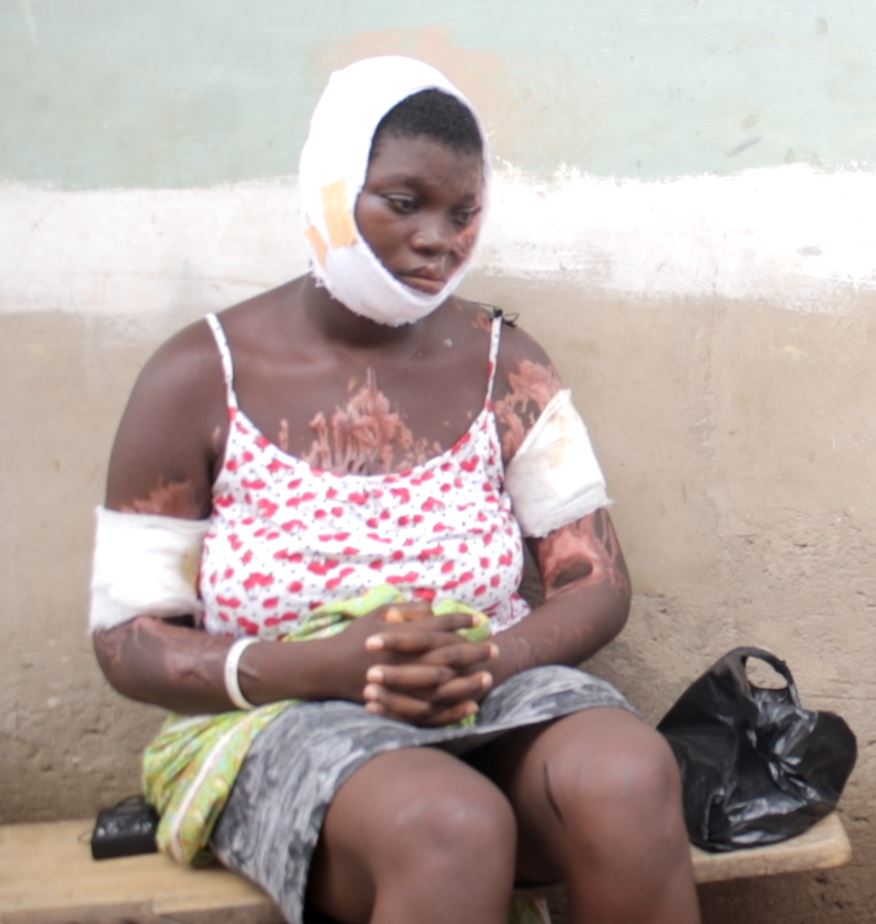 Grace lived with Bright and their two girls in a Kiosk at Ashongman Estate in Accra.

Her boyfriend accused her of infidelity and threatened to make her look unattractive. He carried out the threat without thinking twice, damning the consequences if only he achieved his wicked intentions.

“He confronted me and said I thought I was beautiful; that was why men were chasing me, and so I should wait and see. I would look unattractive very soon,” she recounted incidents prior to her acid bath.

Innocent of the charges pressed against her, Grace said she went about her life not taking the threat seriously.

But two days after the threat, Bright did not return home after the day’s work.

She left the door open, hoping that her lover would come home to her arms.

He did come, not to share a bed with the woman who gave him two beautiful girls but to drench Grace in acid.

He was convinced that the action would make her ugly and deter other men from getting closer to her.

“Around 2 am, I felt a burning substance all over my body, the pain was piercing and strong, so, I quickly ran outside, shrilling for help.

“Our neighbours came out and one of them said ‘that is acid’ after noticing how my mat was melting,” she said sobbing uncontrollably. 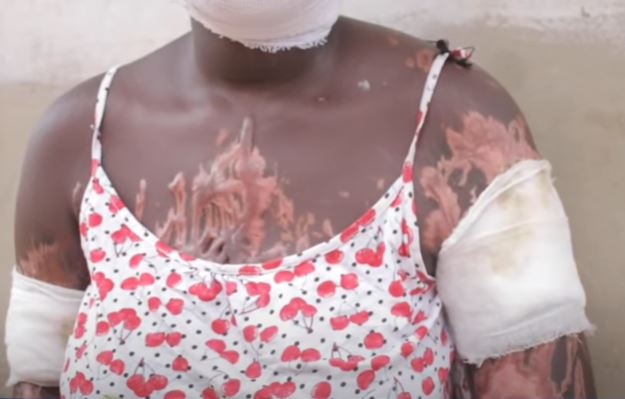 Grace was rushed for medical attention and admitted to the burns unit at the Ridge Hospital but later transferred to Korle Bu Teaching Hospital after two rejections from Atomic Hospital and 37 Military Hospital.

Efforts were made to locate Bright. After several phone calls, he decided to head to the hospital.

“He said he was at Kasoa, but within few minutes, he appeared bathed in sweat. We were all surprised but I ignored it because of the pains I was enduring,” She recounted.

Grace said she now suspects that Bright was hiding somewhere in the area after committing that heinous crime.

The lady had to leave the hospital before her full recovery because of financial constraints.

Her grandmother treats the wounds with basic over-the-counter drugs.

Bright Bosso has been arrested, but before the cops got to him, he had rented out their kiosk and supplemented the money to hire the services of a lawyer.

“Bright has been arrested and has been remanded by the Kwabenya Circuit Court, but the processes to prosecute him has delayed,” a concerned friend of Grace told Crime Check Foundation.

Grace returned to her aged grandmother with her daughters, relying on the benevolence of neighbours to survive.

“We need help; I want to go back to the hospital because the pus emanating from my arms has left me with an awful odour. My children also need help with their school. I pray Ghanaians to help us,” she pleaded.