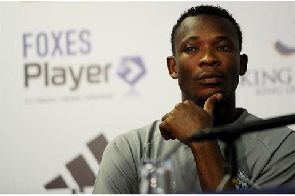 Former Black Stars defender John Paintsil has hit back at former Hearts of Oak winger Bernard Don Bortey’s claims that he is responsible for ruining his football career.

This comes after Bortey accused the former West Ham right-back of framing him of theft during his stay in Isreal 15 years ago.

According to Paintsil, Bortey has until Monday, 4th March to come clean on issues or he will be forced to expose him.

"He came to Israel and I took him as a brother but 15 years after that, he still goes about destroying my image. He knows what he came to do in Israel that led to his stay being terminated by the club," he told Atinka TV Sports Court.

"I give him up to Monday to come out and tell Ghanaians exactly the crime he committed or I will be forced to come and show to the world what he did back by evidence. It was not about a watch he stole.

"There is a damning secret that I have decided to keep for the sake of his integrity as a Ghanaian but if he has decided to blame me, I will spit it out if he doesn't apologize by Monday 4th March," he added.