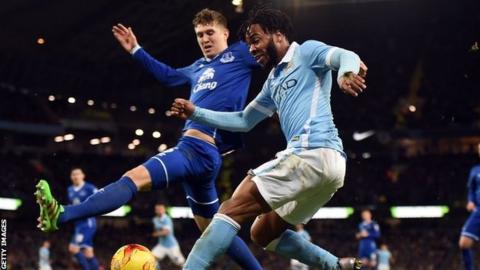 Manchester City have signed John Stones from Everton for £47.5m, making him the world's second most expensive defender.
The 22-year-old England international has signed a six-year deal and is City boss Pep Guardiola's eighth signing.

Stones was earlier named in City's official Champions League squad, published on the Uefa website before the transfer was confirmed.
"It's an ambitious club with a great manager so I can't wait to get stuck in," he said.

"I know it will be tough getting a place in this team but I'm determined to become the best player I can be and help us to success."

In a short statement, Everton confirmed they had received a "record fee" for Stones. The Merseyside club have had a £12m bid accepted for Swansea's Ashley Williams, 31.

The Yorkshireman made 95 appearances for the Toffees in three seasons, scoring once.

Championship club Barnsley, his first club, will get between £7m and £9m from a sell-on clause.

Everton rejected a £40m bid for Stones from Chelsea last summer, with the player having a transfer request refused by chairman Bill Kenwright.

Brazilian David Luiz is the most expensive defender in history, joining French champions Paris St-Germain from Chelsea in 2014.

Last year, City made Raheem Sterling the most expensive English player ever when he joined the club for £49m from Liverpool.

Their first Premier League fixture is at home to Sunderland on Saturday.

Why have City bought Stones?


Their statement described Stones as "one of the world's most promising centre-backs", with a reputation as a "ball-playing, 21st-century defender" who is best at "neutralising opposition attacks" and "launching the first key pass out of the defensive third".

Guardiola said: "We want to help John show his quality with us and improve on what he has already achieved. I like the way he plays the game and I'm looking forward to welcoming him into the squad."

City director of football Txiki Begiristain said: "We have worked hard to bring him to City and we feel we are signing one of the best central defenders in Europe."

The rise of Stones

Stones joined Barnsley's academy at the age of seven and stayed at the club for 12 years.

He made his Tykes debut at the age of 17 and made 24 league appearances before moving to Everton in January 2013 for a fee thought to be about £3m.

Stones has made 95 appearances for the Toffees in three seasons, scoring once, and has 10 international caps.

He was part of the England squad at Euro 2016 but did not feature as they were knocked out in the last 16 by Iceland.