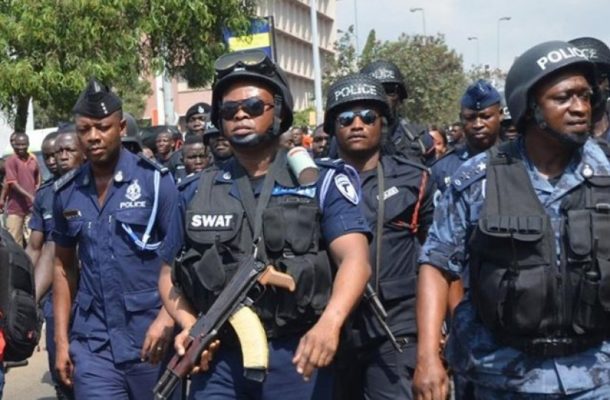 The Northern Regional Crime Officer Supt, Bernard Baba Ananga has disclosed to GhanaWeb that, some people believed to be sympathizers of the NDC who was found burning tires on the streets of Tamale last night, engaged the police in a gun battle when the police went to clear them off from the streets.

Speaking to GhanaWeb, Supt. Bernard narrated that, the incident happened after the former president John Dramani Mahama finished addressing the media around 9:40, some people took to the streets of Tamale and started burning tires at intersections.

He added that, when the incident came to their notice and realizing it could escalate, they immediately mobilized to support the already limited number of police duty to patrol in the night to manage the situation after the election.

“More police were sent to the streets as the protesters also increased in numbers, and so, we had to go and clear the street but some of them resisted”

“Some of them fired at us from unknown locations,” Supt Bernard said, citing “Changli” and “Tishegu” as some of the communities the firing was coming from, adding that, with the assistance of the military, they were able to overpower them.

Supt Bernard noticed that, the guns that were been used by the protesters sounded like that of machine guns, AK47, pistols and snippers.


He proceeded that, “when we tried to clear the burning tires off on the streets some hidden snippers fired at us again, which we also fired back.”

Supt. Bernard noted that, as the military increased their numbers, they were able to manage the whole township from Tamale to Savelugu. “the situation was brought under control, and calm and peace was restored.”

He also said no arrest has been made but the police have intensified preparation and surveillance to ensure such a thing doesn’t repeat.

He, therefore, call on the general public to always feel free to volunteer information, adding that, it is the only way the police can track down those miscreants.