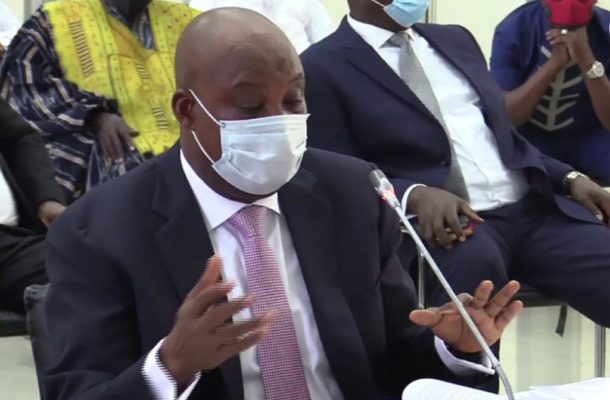 Following Justice Amadu Tanko’s “fatwa" on the wearing of the veil by Muslims students during his vetting by Parliament as Supreme Court judge nominee on Tuesday May 12, 2020, the Muslim population in Ghana has been thrown into quite a commotion.

The nominee, himself a Muslim, certainly stunned his Muslim audience when he dismissed all the human rights and religious freedom arguments of the Member of Parliament for Bawku Central, Honourable Mahama Ayariga, and insisted, not once, not twice, but three times, that basic and second cycle schools can disallow veiling, if they deem it appropriate. As his shocked Muslim audience groaned, Justice Tanko twisted the knife in their wound by declaring that faith is about one’s relationship with God, not a matter of clothing. The learned judge then grudgingly conceded that adult Muslims should be allowed to wear the veil at their work places, but with a strange caveat; “if the hijab does not offend, does not put the life of that person in danger.”

Now, my questions to Justice Tanko;

Is there any workplace situation you can think of that would make the wearing of the hijab offensive to others or harmful to the person wearing it?

Take for example that the Baptist Church has effectively barred a Muslim girl from wearing the veil in their basic and secondary schools. This girl goes on to complete her tertiary education, gets employed by the Ghana Health Service (GHS) and posted as a nurse or administrative officer to a Baptist health facility under the GHS. Do you expect them to welcome her back and love her hijab?

If the organisation falsely claims that its decision is based on safety concerns and expert advice, what can the employee do?

Justice Tanko made Ayariga look like a fanatic who was splitting hairs over a trivial matter. Yet, I am convinced that on the strength of the arguments advanced by the MP, himself a lawyer, any fair-minded judge of any religious faith would have ruled that Muslim pupils and students must be accorded the right to wear the veil at school.

The fact is the hijab issue is nothing hypothetical, it is a reality. In many public schools across the country, Muslim students are allowed to, or forbidden to wear the veil based on the outlook of the headmasters. If they are open-minded, they accept it. Sometimes, it is some Islamo-phobic teachers who take it upon themselves to force the girls to abandon the veil, sometimes, amidst derogatory remarks aimed at undermining the victims’ confidence.

The wearing of veils in school is a norm in Muslim schools across the country, and the Ghana Education service (GES) has never suggested that it is unlawful or disruptive in any way. Muslim-established public high schools like Azhariya, Tawheed, Osmania, Nurul Ameen, Sakafia all in Kumasi, have a policy of exemption of non-Muslims from wearing the veil, while the Muslims wear their veils without any problems.

My alma mater, T.I. Ahmadiyya Senior High School, Kumasi, has a lovely example to share. It grants default exeats to its Christian students, with the consent of their parents, to worship at their various churches in town on Sundays. The Muslim prayer,Fatiha and the Lord’s Prayer are both said at assembly. Christian students are free to decide whether or not to wear the veil. And it is a source of pride for the school that two former Moderators of the Presbyterian Church of Ghana, Right Reverend Dr. Sam Prempeh and Right Reverend Dr. Yaw Frimpong-Manso,are its products.

Clearly therefore, the crust of the issue is hostility and intolerance on the part of the non-Muslim side. How else do you explain the attitude of the Catholic church, for example, whose nuns also wear the veil even in formal settings, and yet show hostility to the veil once it worn by a Muslim student or worker in their institution?

Can anyone imagine what the reaction would be if the headmaster of Tamale Senior High, for instance, got up one day and insisted that Christian students should attend Muslim worship? Yet, this is the very dose of evangelical vaccine that Muslim students have had to endure on a daily basis, even in non-Mission schools, with the Ghanaian public complicit by its tacit attitude.

It is unfortunate that Justice Tanko woefully failed to seize the golden opportunity to call for more tolerance and social integration, rather than advise Muslim parents to avoid sending their children to schools whose heads decide to undermine their Muslim faith.

Twelve years ago, a Muslim student of Adisadel College fell to his death while reportedly fleeing a teacher who was pursuing him and other truant students to attend school church service. Tragic as this incident was, it sadly failed to sear the national conscience and lead to a conclusive decision about this patently intolerant and unconstitutional school practice. And it is not an innocent practice. On the contrary, it is a way of grooming Muslim students to feel alienated from their folk, to develop a complex of wanting to be “acceptable” in their manners and outlook.

Just like Justice Amadu Tanko, an influential Muslim and Chairman of a political party, while commenting on the Muslim student’s death and the subsequent furore, ended up rubbing salt into the wounds of the grieving Muslim community. He said in an interview that they were making too much fuss about the issue of compulsory church attendance, adding that he was a member of the St Thomas Aquinas Secondary school choir during his school days but that did not make him a Christian.

Of course, he did not renounce Islam. But what the politician failed to recognise was that he had been groomed to appreciate matters bordering on his Muslim faith in a casual manner; that he was reacting to the tragedy exactly in the detached manner his upbringing in school had anticipated.

In the face of this challenge, what must the Muslim response be? Must we always wait to react after the damage has been done? What proactive measures can the Ghanaian Muslim community adopt to ensure that its elites are purged of the mental and intellectual toxin that makes them instinctively seek acceptability from outside rather than from within; that makes them feel that they must suppress their Islam in order to be acceptable?

Muslims can build their own model basic and second cycle schools. But doing so in anger and protest at the current injustice will create an educational apartheid system which would not be healthy for inter-faith understanding and social cohesion.

We should continue to advocate for a change in the status quo, so that even if Muslims decide to scale up the establishment of schools of their own, these schools can also be accommodating of students of other faiths.

We must understand that the elite class of Muslims are of diverse upbringing, some of them even born of Christian mothers. It is the duty of Ghana’s Muslim leaders, those privileged to be brought up in “religious” environments and the “self-righteous” among us to get close to the “less privileged” elites. If we do not invest in a Muslim professional, we cannot claim any fraternal rights over them. The Office of the National Chief Imam and imams at the regional and district levels must take up the challenge to warm up to Muslim elites and professionals, and figure out how their various expertise can be tapped for the development of the Muslim Ummah. We must support them morally and pray for their success. This way, they will become more confident fraternising with their fellow Muslims and responsive to issues affecting the Muslim community.

If we continuously fail to plan in this regard, we will always be put before the fait accompli and find ourselves in a reactive posture.Yes, Justice Amadu Tanko’s stand on the hijab issue was palpably biased, and he deserves the flak he has received from his fellow Muslims. But we have attacked him enough. Let’s now give ourselves and the learned judge another chance at reconciliation. In this regard, I think it is for Justice Tanko to take the initiative. Above all, let’s pray for him to be confirmed.

“The believers are but brothers, so make peace among the brotherhood; and show reverence to Allah that you may obtain His mercy.” – Qur’an 49:10

May Allah help us, make us better Muslims and more productive Ghanaians.