Kalybos and I planned to have a baby - Ahuofe Patri reveals 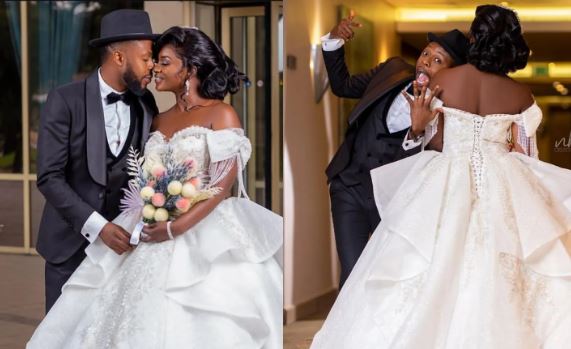 Ghanaian actress Ahoufe Patri, has revealed that she and comedian Kalybos agreed to go into a relationship after two years if they were both single.
Ahoufe Patri and Kalybos broke into the limelight through the popular comedy series ‘Boys Kasa’ with Kalybos trying to win Ahoufe Patricia to be his lover.

In an interview with Onua FM, Ahoufe Patri disclosed being romantically attracted to Kalybos, whom she has agreed to date if they are both without lovers.

She said: “We have come to an agreement that, after two years, if I don’t have a lover and he also does not have one, we will have a child. So watch out, if you don’t hear that either Kalybos or myself is married, we will have a baby coming out,” Ahoufe Patri continued. “We will probably start paying attention to each other. We are in each other’s plans.”

The Actress also mentioned that her current showbiz name, “Ahoufe Patri” was given to her by Kalybos during their skit-making at the National Film and Television Institute (NAFTI).