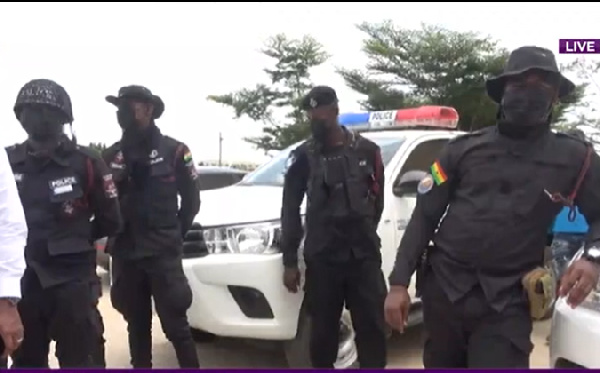 DCOP Okyere Boapeah, Commander of the newly formed Central East Police Command has stated that Kasoa is becoming notorious for crime partly because of the activities of Nigerian criminals.

The Commander made the comments during a press briefing on Wednesday, November 10, 2021, to announce the arrest of some 26 suspected Nigerian internet fraudsters at Iron City a suburb of Kasoa,

He said there were two females in the arrested party adding that they will be screened and those implicated for any offences charged to court.

DCOP Boapeah stated that the operation that led to the arrests formed part of their move to clamp down on criminal activities in Kasoa and its environs.

The operation took place at Iron City a suburb of Kasoa in the Awutu Senya East Municipality. Some items retrieved from the raid included laptops, mobile phones and substances suspected to be Indian hemp.

DCOP Okyere Boapeah, Commander of the Regional Police told journalists, the operation took place “in three houses rented by foreigners mostly Nigerians were raided … exhibits made up of 31 laptops, 26 assorted mobile phones, five machetes and substances believed to be cannabis were found in their rooms.”

“Kasoa has gained notoriety because of these Nigerians, we have to keep surveillance on them, their activities, so that if there is anything suspicious in their movement or work, you can inform the security agencies, more especially the Police.

He admonished landlords to investigate foreign tenants properly and report to Ghana Immigration Service to ensure they have the right resident permits to be in the country.

Barely a week ago, Police under the same Command confirmed that they acted on intel and conducted an operation that led to the arrest of some 100 persons in the Kasoa enclave.

According to a Citi News report, the swoop - led by Divisional Commander DCOP Okyere Boapeah - took place at SMG arena pub which is located on the Gomoa Nyanyano stretch.

Some of the crimes police found the suspects engaged in included smoking of illegal substances while some commercial sex workers were also picked up in the process.

The suspects who are being screened comprised foreign nationals and some Ghanaians.