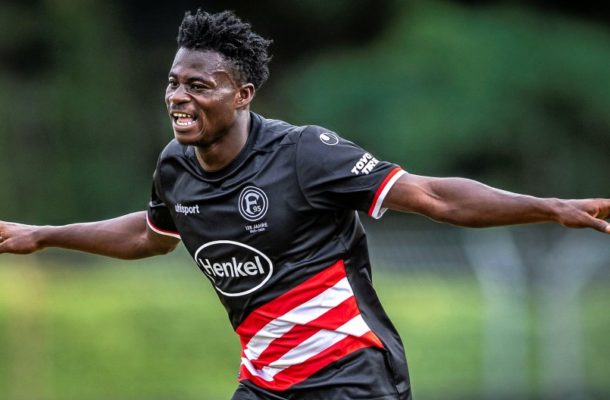 The 18-year-old attacker could make his Bundesliga debut should he be considered by Uwe Rösler in the clash at Schwarzwald-Stadion stadium.

So far, the story of Kelvin Ofori and Fortuna Düsseldorf has been a cup-only story. He has played twice in competitive games, twice in the cup, and twice he has performed well. Under former coach Friedhelm Funkel, the Ghanaian was six times in the Bundesliga squad, but the ex-coach never sent him to the grass.

That could change at the weekend. Ofori will travel with the Fortuna team to Breisgau for the game against SC Freiburg (Saturday, 3:30 p.m.). And the new coach Uwe Rösler is said to have no inhibitions about using the great talent.

A look back: In the first cup round, Fortuna delivered a really bad game to fifth-division FC Villingen and has to go into extra time. Substitute Ofori scores 2-1 in a 3-1 win with a nice flick. In the second round, Fortuna will then have to play for third division club 1. FC Kaiserslautern. The Dusseldorf are 1: 2 behind at half time. Rösler brings Kevin Stöger and Ofori. Both liven up the game, Fortuna moves into the quarter-finals with a 5-2.

Suspended in the regional league team

When the Fortuna team will make their way to southern Germany on Friday, Ofori will also be on the bus. He has just served his suspension after being assaulted at Fortuna's second representation in the regional league and is now eligible to play again. And Uwe Rösler does not rule out that Ofori will make his Bundesliga debut on Saturday. This differentiates the trainer from its predecessor. Funkel also saw the attacker's great talent, but always emphasized that Ofori would still be missing a lot to survive in the Bundesliga.

Rösler does not see the risk, the 51-year-old sees the chance that the lightheartedness and the unknownness Oforis can help the team in this crucial season phase, in which the next five games will have to win. Above all, the coach hopes that Ofori can solve one-on-one situations and also play clever passes behind the defense chain. That is why Rösler sees the talent who still has a contract until 2022 best as a ten in the playmaker position.

Since taking office, the coach has anchored 3-5-2 as a new standard system. In Kaiserslautern, he switched to a 3-4-1-2 with Ofori. For the position behind the tops, Rösler has another player in mind: Kenan Karaman. He will also be in the squad on Saturday. The Turkish international did not return to team training until this week after a four-month break.

“Kenan is in a very good physical shape. He worked well, ”says Rösler. “He is an experienced, intelligent player. His qualities are good for us as a team. ”The coach also believes that the 25-year-old has dealt with his severe pneumonia mentally well.