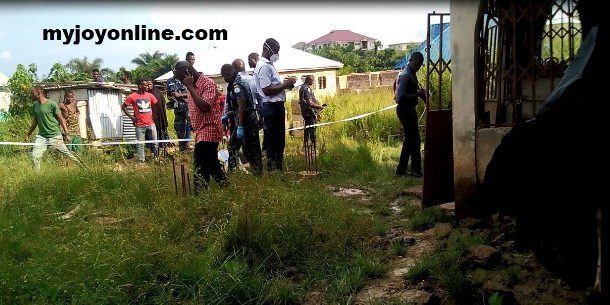 At least, two residents of Kenyasi-Achiase have been forced out of their homes to seek refuge elsewhere following threats of deaths over the rescue of kidnapped Canadian women.

They say people they believe are aligned with suspects arrested in connection with the incident, are hounding them with accusation they gave tip-off to the security.

One of them is a 35-year-old trader who says her life and those of her six children are in danger.

The two-bedroom house where the two women were rescued continues to attract people.

The place, until Thursday, was classified a security zone as police crime scene team got busy picking evidence.

Only a few Criminal Investigations Department officers who led Canadian officials to the scene were present at the time of our visit on Thursday.

Two members of the community who provided assistance and spoke to journalists say their lives are being threatened by people believed to be connected to the kidnapping.

One of them is this 35-year old trader. She is taken refuge outside the community after she sensed that her life was threatened for commenting on the issue on UTV.


"I was at home yesterday when some men asked for direction to where shots were fired in our area. They asked that I lead them to the place in their car since they had difficulty locating the place. It was there that I got to know that, that was where the kidnapped Canadian women were being kept.

“Unknown to me, the owner of the house is actually someone who lives in my neighbourhood. Upon my return to Abirem, news had spread all over that I am the one who led police to the house to arrest the kidnappers because they saw me on television. I have since then become a target. Everyone is attacking me," she said in Twi.

Her  15-year old daughter told JoyNews how some unidentified men in a private car trailed her as she was returning from church. The JHS 2 pupil who said she had since not to school, fell and sustained injuries including a fractured leg in her attempt to flee from the men.

Her Mum said she initially brushed off the threats until her husband started receiving threatening messages and calls.

"Initially I didn't treat it as serious until they started sending threatening messages to my husband's phone. Once the man who owns the house remains at large, I can't have my peace of mind," she said.

Unlike this trader who has reported the threat on her life to police, the other person is yet to do so.

Police at Kenyasi say they are looking into the issue after confirming receipt of such complaints.