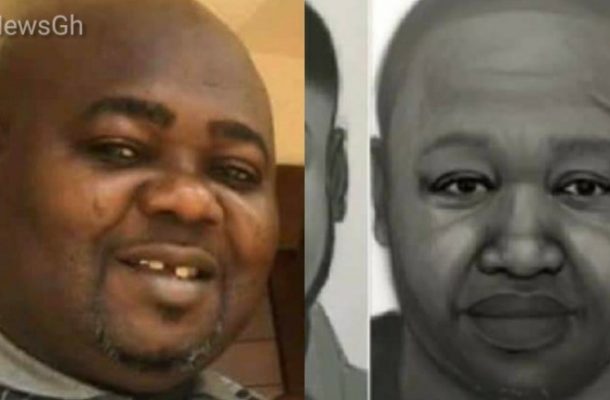 Controversial journalist, Kelvin Taylor has dropped a picture of a man believed to be the bodyguard of Assin Central MP Kennedy Agyapong, one Kudus, who social media users say looks like the sketched portrait of the suspected killers of Ahmed Suale.

Kelvin Taylor who may be insinuating a connection between the portrait and the attached picture of the alleged bodyguard of Kennedy Agyapong left his followers to draw conclusion while many warned him to desist from tampering with an on-going investigation.

Some of his followers believe the timing of the release of the portrait and the latest picture could be a scheme to point at Kennedy Agyapong as was the original intent when Anas released a quickly-edited video of Kennedy Agyapong.

Knowing how Anas was quick to point fingers at Kennedy Agyapong as a possible suspect few minutes after the murder of Ahmed Suale, some questioned if the portrait and its glaring resemblance with Kennedy Agyapong’s bodyguard could be trusted because the sketch was not done by the police but rather by Anas and his team.

Mr Kennedy Agyapong last year offered a GH₵100,000 reward to any member of the public who will volunteer information that would lead to the arrest of the murderer or murderers of an investigative journalist, Ahmed Hussein-Suale.

Mr Agyapong has been accused of masterminding the killing of Ahmed, says he is making the offer because his reputation is at stake.

Speaking on Net2 TV, the legislator said “It’s a human being that has died, no matter the mistake he has made, he has the right to live”.

“What I want to do is, anyone who can give information to assist in the arrest of the suspects will receive GH₵100,000 from me, because it’s my reputation on the line,” he added.

Anas Coalition and the portrait

Ahmed was shot dead by unknown assailants who were riding on a motorbike whilst the journalist was in a moving car in his neighbourhood six-months after the premiering of Number 12, an investigative exposé into the Ghana Football Association.

The late Ahmed Hussein-Suale, according to Anas Aremeyaw Anas was a key producer of that investigative piece.


Anas Coalition in a Facebook post released an artist’s impression of the two men who allegedly murdered his colleague.

The Coalition said, “Anyone with knowledge of their whereabouts could kindly volunteer such information to the security services.”

Kelvin Taylor’s publication of the picture has sent many people wondering.

A renowned international journalist, Guillaume Perrier, has published findings of a private investigation into the murder of Ahmed Hussein Suale, alleging that the Ghana Police Service failed to follow up on a key lead.

Mr Perrier last week tweeted that his team of investigators have proof that former President of the Ghana Football Association (GFA), Kwesi Nyantakyi, sent death threats to the murdered undercover journalist and although the death threat has been filed, it was not pursued.

“We also met former head of Ghana FA Kwesi Nyantakyi, banned for life by FIFA after being filmed by the investigative journalist pocketing $65,000 in a fake sponsor deal signed in Dubaï. And we can reveal that he also sent death threats to Ahmed Suale in 2018.”

“Be very careful! You can easily lose your life with that’ he said to Ahmed in a phone conversation. The recording of it is part of the criminal file but was not investigated by Ghana Police,” Mr Perrier alleged.