Killing the customer with bare hands 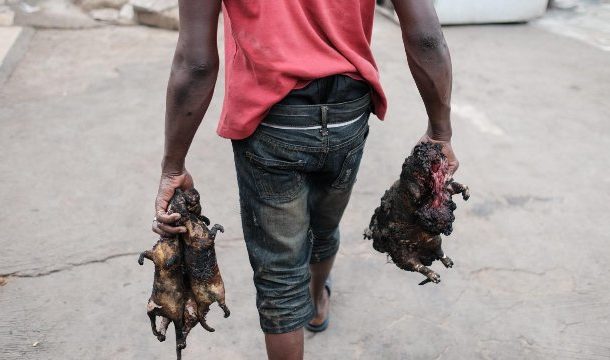 In this era of globalisation and civilisation one would have expected a high level of careful and hygienic food handling practice to improve the living conditions of people.

Unfortunately, certain categories of food, especially vended and traditionally prepared ones, are still handled the way they were centuries ago and probably killing customers silently.

When this is placed beside the poverty situation of African countries and other developing countries, the world over, the danger is exacerbated and is almost impossible to stop.

One major area of concern is food handling with bare hands and serving the customer, an area of human life that directly affects the health of millions of people, largely due to poverty and ignorance and sometimes the combination of both.

According to the Food and Drugs Authority (FDA), bare hand contact can transfer dangerous pathogens from hands to food, spreading foodborne illness.

In fact, bare hand contact with ready-to-eat foods is responsible for 30 per cent of restaurant foodborne illness outbreaks.

Careful studies of serving food with bare hands and its related dangers can serve to eliminate large amounts of diseases and health risks that still afflict a greater number of the population in Ghana.

Serving traditionally prepared food such as fufu, kenkey, waakye, koose, Kuli kuli, bread just to mention but a few, still has no alternative way of serving customers without using the bare hands.

Although hand washing is critical for food safety, recent studies indicate that hand washing alone is not enough to prevent foodborne illnesses.

The main reason for not touching ready-to-eat foods with bare hands is to prevent viruses and bacteria, which are present in the body, from contaminating the food.

Viruses and bacteria are not visible to the naked eye, but may be present on the hands, if not thoroughly washed, particularly after using the bathroom.

Here in Ghana, the situation is different as many food service workers still used bare hands to serve food and used that same bare hands to receive dirty currency notes, which further increases the danger of contamination.

A careful observation of the preparation of fufu, for instance, the food service workers use bare hands with untreated water to prepare the food, the pounder profusely sweats into the food consumed with bare hands.

Eating fufu in Ghana has been so addictive that no one takes a critical look at its preparation, serving and consumption.

Ridiculously, people use clean water to wash their hands before eating fufu without questioning the bare hand and the water used for its preparation.

Another food that is widely abused using the bare hand to prepare and serve the customer is bread. From its baking to its shelf, bare hands are used to serve the customer that feeds on dirt. The least said about meat on the butcher's table the better.

A visit to any kenkey, waakye or fufu joint, one will appreciate the possible dangers attached and instant education could be given as a way of addressing the problem to curb food borne diseases in the country.

The irony is that a greater number of the population still enjoy the orthodox or the traditional way of food preparation and serving using the bare hand, ignoring any health danger.

It is a fact that any form of fufu preparation other than the traditional way loses its taste and relevance, but same fact is the environment, it is highly polluted today than it was years ago. One must therefore not allow someone to kill us with bare hands.

The FDA placed food hygiene as the conditions and measures necessary to ensure the safety of food from production to consumption.

The World Health Organisation (WHO) sources say, "Food can become contaminated at any point during slaughtering or harvesting, processing, storage, distribution, transportation and preparation.

Lack of adequate food hygiene can lead to foodborne diseases and death of the consumer". WHO also assists member states in promoting safe food handling through systematic disease prevention and health education programmes directed to food handlers, including; the consumers.

Diseases that people get from eating contaminated food are an important cause of illness, disability and deaths around the world, as revealed by the first ever WHO Estimates of the Global Burden of Foodborne diseases published in December 2015.

Foodborne diseases-especially those caused by bacteria, viruses, parasites and fungi - are preventable, and education in safe food handling is a key measure for prevention, including; to contain antimicrobial resistance.

WHO built the Five Keys to Safer Food Programme to assist Member States in promoting safe food handling behaviours and educate all food handlers, including; consumers, with tools easy to adopt and adapt.

The Five Keys to Safer Food explain the basic principles that each individual should know all over the world to prevent foodborne diseases.

Over 130 countries have reported using the Five Keys to Safer Food. As a result, billions of food handlers, including consumers, are empowered to prevent foodborne diseases, make safe and informed choices and have a voice to push for a safer food supply.

To ensure the same understanding in practice along the full chain WHO has developed additional Five Keys materials directed to rural people who grow fruits, vegetables and fish for their own use or for sale on local markets.

The objective of WHO is to target those who usually do not have access to food safety education despite the important role they play in producing safe food for their communities (e.g. rural women).

Unfortunately, however, Ghana’s Public Health Act, Act 851 of 2012, has not spelt out measures that prohibits people from using their bare hands to serve food to their customers and the dangers that are attached to the practice.

There is no law in Ghana that makes it criminal to serve food with bare hands, which makes it easy for food handlers to do it the way they wantt and sell to the public.

Mr Albert Ankomah, Upper West Regional Director of Food and Drugs Authority described the situation as worrying saying, "This is an area we are not paying attention to and many innocent customers are suffering it."

He explained that, though, there is no law prohibiting people from serving food with bare hands, there is a law that punishes people whose food poisoned customers whether they served with the bare hands or not.

In view of the dangers associated with consuming food served with bare hands, it is important to carry out mass education aimed at stopping the practice.

Nothing prevents the country's lawmakers to enact laws to make it criminal to use bare hands to sell or serve food.