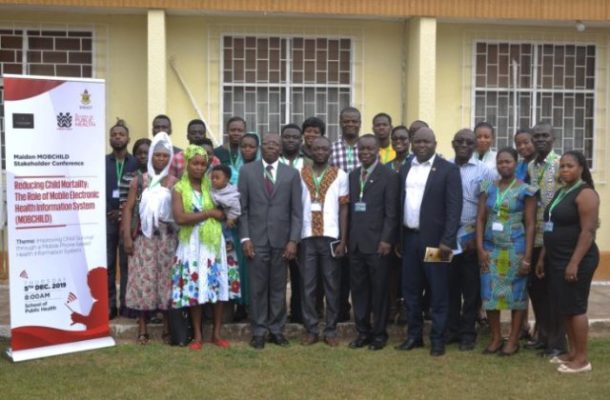 One of the targets of the Sustainable Development Goals is to end preventable death of newborns and children under age five.

Though 120 member states of the United Nations have already met the SDG target, 21 others, including Ghana, have up to 2030 to do so.

Hopefully, a mobile phone health information system which allows parents to seek and receive diagnosis and treatment of their sick children at home, would take Ghanaians there.

The risk of a child dying before age five is highest in Africa regions; 76 of 1000 live births  compared to 9 of 1000 in European regions.

“47 per 1000 live births is a drastic decline over where we used to be post-independence which was around 207. But that is not enough. We’re concerned with under-five mortality, because it is an indication of how well we’re doing as a country,” noted Dean of School of Public Health, KNUST and Principal Investigator, Prof. Ellis Owusu-Dabo.

Most infant and child deaths occur in rural areas, where health infrastructure and other resources are inadequate.

Limited access to primary health facilities has compounded the situation.

“We wanted to a way we can use mobile phone as a simple tool to help a mother to take quick action when a child has certain symptoms of a disease. So if a mother has a mobile phone, it’ll reduce the delay in seeking healthcare,” said Prof. Ellis Owusu-Dabo.

Known as Mobchild, the system is the outcome of a joint project by Kwame Nkrumah University of Science and Technology School of Public Health, Esoko Ghana and the Ghana Health Service.

The system is designed with an automated interactive voice response technology.

It allows under-five child caregivers to dial into the computer system over a telephone line in the local dialect.

“It is designed based on a clinical algorithm, that is, Integrated Management of Childhood Illnesses. Caregivers are given toll-free hotline to call and describe the disease symptoms of their sick children. After answering a set of questions, data on current disease symptoms are gathered,” said Business Advisor at Esoko, Eugenia Malan.


The technology also seeks to optimise the District Information Management System which has been bedeviled with erroneous entries among others.

It is been piloted at the Asante Akyem North District.

“We seek to move to the second phase which will bring on board other communities or districts. We would want to implement the system in the whole of Ashanti Region and before that we need evidence to back the expansion of the project.  For now we still have two more years to go. So we would share the lessons learnt.” said Coordinator, Dr. Aliu Mohammed.

So far, the results have been encouraging.

“His father wasn’t around. My son was vomiting and having diarrhea. They advised me to take a certain drug and the symptoms disappeared.  After that, they told me if fever appears the next morning, I should send him to the Hospital. I followed and my child got well, “recounted Hannah Nyarko, a resident of Agogo.
Myjoyonline