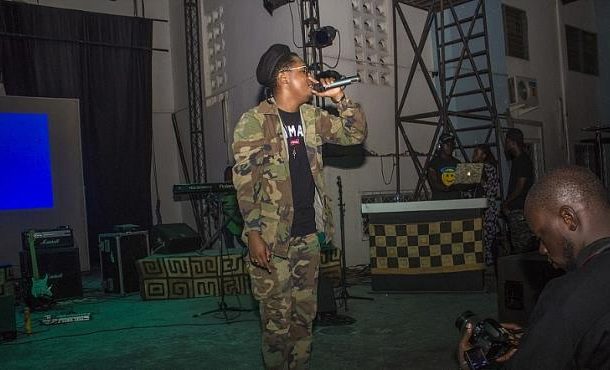 Award-winning rapper, Ko-jo Cue, kept a large crowd up for hours with his back-to-back performance of his songs at his recent 'Ko-Jo Cue For President' concert at Alliance Française in Accra.

The BBnZ Live artiste, born Linford Kennedy Amankwaa, proved he is a force to reckon with, thrilling hip-hop fans who patronised the show in their numbers.

The 'Ko-Jo Cue For President' concert was organised by HPR Official to connect with the rapper's fan base ahead of his upcoming album. The show had major attendance and the fans, indeed, got served. Cue's performance got everyone on their feet. Patrons who were familiar to his songs sang and rapped alongside him. After first five songs into his performance, Cue left the stage for rapper Cabum to take over. Many had thought Cue was done with his performance, but he surprisingly returned to entertain the crowd even more. Ko-Jo remains one of the best hip-hop and Afro-pop talents to come out of Kumasi.

In 2014, he dropped his mixtape titled 'The Shining' to incredible reviews from critics. The mixtape went on to be downloaded more than 12,000 times and trended on social media for two weeks.

His 2015 single titled 'Lavender' has charted on more than six major radio stations in Ghana. It was remixed by DJ Kess (the most famous Ghanaian female DJ) and he followed it with his first official video months later. He is currently a new force to reckon with on Ghana's music scene.