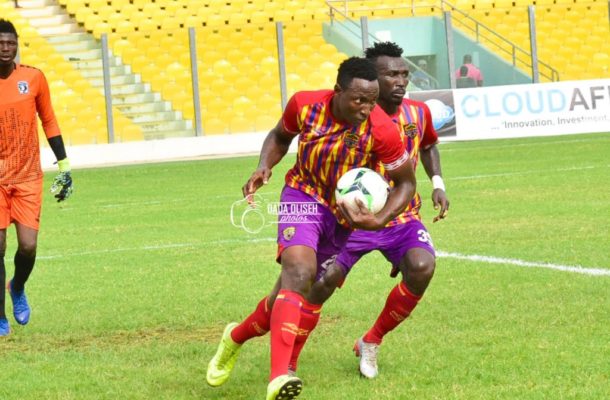 Accra Hearts of Oak had to earn victory the hard way against plucky Bechem United at the Accra Sports Stadium in a match the away side took the lead.

The Phobians going into the game had recorded only a single victory at home in the Ghana Premier League beating Ebusua Dwarfs.

Bechem United broke the deadlock from the spot after the referee had adjudged Prince Adu Kwabena was tripped in the Hearts of Oak box.

16 year old Prince Adu Kwabena  stepped up and converted to register his 7th goal of the season in the 28th minute of the game to give the visitors the lead.

Four minutes later burly striker Kofi Kordzi converted from the spot after the referee awarded Hearts a penalty for a suspected handball incident to level the scores.

It was all square when both sides headed for the break but Hearts turned on the screw when the second half resumed.

The Phobians restored their lead after captain Fatawu Mohammed converted from a corner kick in the 64th minute but a stubborn Bechem United side will not stay quiet for long as Hafiz Konkoni converted from the penalty box after a neat team move to peg the game back to 2-2.

But there will be late drama as the Phobians lived up to their moniker of never say die until the bones are rotten when Kofi Kordzi rose highest to head home the winner deep into stoppage time to send the stadium into raptures.