Kwahu-Nkwatia Palace shut down; all occupants ordered to vacate premises 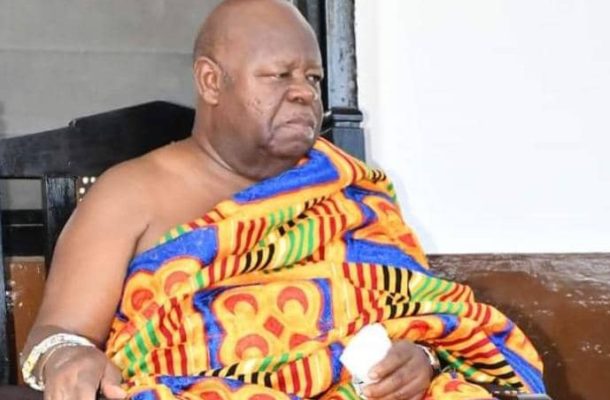 President of the Eastern Regional House of Chiefs, also the Konor of the Lower Manya Krobo Traditional area, Nene Sakite

The Nkwatia Chief Palace in the Kwahu East District of the Eastern Region, has been shut down.

According the Eastern Regional House of chiefs, the closure will pave way for proper stock-taking of stool properties.

The statement signed by Registrar, Richmond Peseu, "This is to notify all occupants of the Kwahu Nkwatia Palace and the General Public that with effect from today 2nd March 2022, the Palace has been closed off to pave way for proper stock-taking of stool properties on 14th March 2022."

It added, "All occupants of the Palace must as a matter of urgency vacate the Palace immediately." 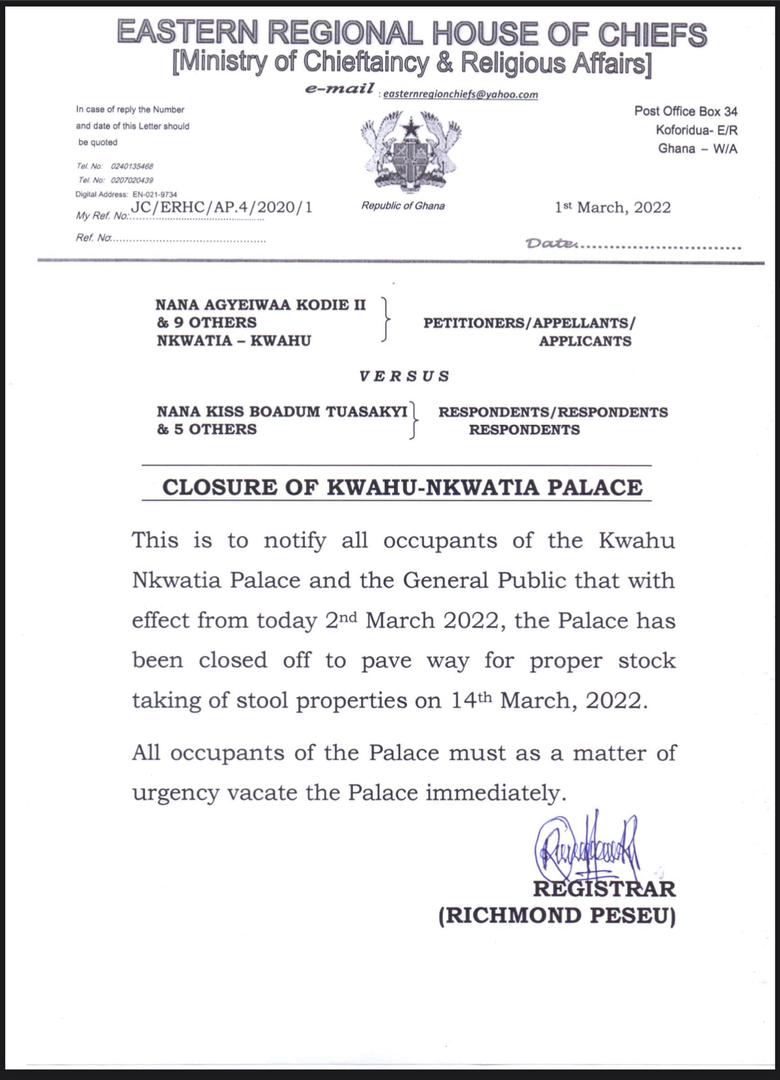 However, pieces of information gathered indicates the Regional House of Chiefs will soon give its final ruling on the Nkwatia Chieftaincy case after the Court of Appeal in Koforidua, presided by the three Appeal Court Judges dismissed the Application for stay of Execution that was filed by the Akyeamehene of Nkwatia, seeking to prevent the Registrar taking over the Nkwatia Palace.

Last year, the Eastern Regional House of Chiefs on three occasions failed to give its final judgement on the Kwahu-Nkwatia chieftaincy judgement over reasons yet to be unraveled.

It will be recalled that a previous ruling delivered by the Judicial Committee of the Eastern Regional House of Chiefs ordered the Registrar, Richmond Perseus, to forcefully eject one Samuel Boama Danso after he allegedly occupied the Nkwatia Palace and claimed to be the chief of the town.

Aside from the order to eject the self-acclaimed chief, the Registrar was also to seize all properties belonging to the Nkwatia stool.

Following the challenges thrown against him over his alleged occupancy of the Nkwatia Palace, Samuel Boama Danso petitioned the National House of Chiefs to block the decision by the Regional Judicial Committee to halt him, a development that prevented him from moving out of the palace.

However, the Judicial Committee chaired by its President, Nene Sakite, the Konor of the Lower Manya Krobo Traditional Council, and four other traditional leaders after listening to both sides, decided to give the final ruling on December 15, 2021, but the plan was cancelled on the December 14, a day before without any reason.

They later adjourned the ruling date to February 2, 2022, but it was also cancelled at the last minute. It was further rescheduled to February 23, 2022, but was called off on a day before until further notice.

The several failed attempts in coming out with a ruling have resulted in creating tension in the local community as the residents are increasingly losing interest in the Regional House of Chiefs on how they are handling the case.

Sources say some authorities have intervened to block the final judgement to be passed since they believe the ruling will go against the self-acclaimed chief.

Meanwhile, some sub-chiefs who are not happy with how the process has been handled have boldly come out to condemn it, and are now living in fear as a result of some threats they are receiving from some "powerful men".

Last week, a saloon car belonging to the Gyaasehene of the Nkwatia Traditional Area, saloon car was set ablaze by unknown persons one early morning.

In October 2020, the Krontihene of Nkwatia – Nana Osei Tutu Ababio and some stool elders as well as the kingmakers installed Samuel Boama Danso as the chief of Nkwatia. He was given a stool name Nana Boama Ayiripe II.

However, according to the Regional House of Chiefs, the installation was illegal since it failed to go through due diligence.

This was later challenged by the queen mother of the town, Nana Agyeiwaa Kodie II, and some nine others from the Judicial Committee of the Eastern Regional House of Chiefs.

The petition was initially dismissed by the Judicial Committee of Kwahu Traditional Council on October 16, 2020, before the petitioners appealed at the Regional House of Chiefs.

They subsequently applied for an interlocutory injunction on November 20, 2020, against the respondent from carrying himself as chief of Nkwatia and that was granted in a ruling delivered on March 24, 2021, by the Judicial Committee pending the final determination of the substantive case.

A protracted chieftaincy dispute rendered the Kwahu-Nkwatia Stool vacant for three years after the death of Nana Atuobi Yiadom IV in 2016, who reigned for 60 years.

Sefa Samuel 6 months ago
Thank you very much Nana Nene Sakite, the president of Eastern Regional House Of Chiefs for your boldly step you have taken. And we are praying that we will have the right judgment