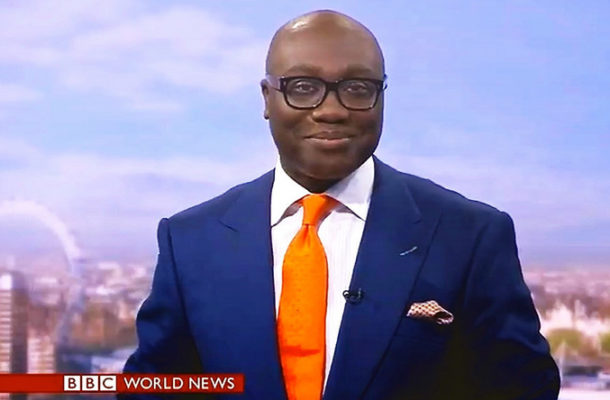 I saw Komla Afeke Dumor once a week. He would be leaving as I entered the studio to present the Front Page, my own weekly current affairs programme, which was aired shortly after the news at 8 a.m. on Fridays, which meant the Super Morning show was abridged on that day of the week.

Sometimes we would have a quick banter, as he squeezed his frame free from among the studio furniture. Or we would do a quick informal feedback of our respective shows when I was done. Or we would share “10-minute solutions” to all of Ghana’s problems — a favourite pastime of “too known” Ghanaians.

We would wonder what it was with the view from above that prevented those up there from seeing what appeared obvious at street level ... or from behind the presenter’s console.

In 2001, I received a call from the Ghana Journalists’Association Awards Committee.

The chair of the committee said I’d been nominated for Journalist of the Year. It would be the third time. I said thank you, but I thought the award would better serve its purpose of spurring journalists on if it went to someone else who had never won it.

Komla Afeke Dumor was first runner-up. The award went to him.

I was happy for him. He acknowledged me in his excellent acceptance speech although I played no part in his award, except vicariously.

He deserved it on his own steam.

But my most significant encounter with Komla predates his days as a big star. It was in 1998. Or thereabout.

Komla Afeke Dumor had been hosting the Super Morning Show on Joy Fm for a year or so; can’t quite recall, but long enough and, more importantly, well enough to have made an impression on me and I believed on a huge number of listeners.

I was working for the BBC then as its Ghana correspondent, reporting primarily for the African Service’s afternoon programme, Focus on Africa, and Network Africa in the mornings. Occasionally, if there was a big enough story, usually a regional one coming out of Accra, we would make the World Service.

But he was on Joy FM hosting a flagship programme and doing it excellently. He appeared to be going some place.

So I pitched his story — the story of this impressive new kid on the block - to the producers at Network Africa.

I told them about his medical school stint; about his unofficial apprenticeship as a scooting “traffic reporter;” about his voice, about his physical presence; about his erudition and about how I thought he was going some place.

It was an easy sell.

I interviewed Komla Afeke Dumor live for the show.

It must have been the third edition of Network, which ran from 5.30 a.m. to the top of the hour. Looking back, it seems magical how much the producers managed to pack into a half-hour show.

There was the intro and proverbs and the world news headlines and interviews with newsmakers and stories of war and peace from around the continent and special features and packages and a spot of music and listeners’ letters and text message and entries to competitions and I can’t believe they killed it and I digress….Back to Komla Afeke Dumor.

I went to Joy FM with my mobile phone to interview Komla Afeke Dumor.

I didn’t have a fancy gadget. I was allocated a portable satellite equipment a few years later, which enhanced the quality of interviews in the field. But on this day it was just my phone.

I would say the question into the mouthpiece, hand the phone to Komla Afeke Dumor to respond, and then he would hand it back to me for the next question, and so on.

We spoke about his dropping out of medical school and how he’d had to go to first-year all over again to begin humanities studies, and then found his way onto radio doing traffic news by scooting around Accra.

He was self-deprecating as he described the awkward sight of his six-foot-something, 200-pound frame squelching a little scooter around the city, and how his mates on campus liked to poke fun at him for taking on such a lowly job.

But he’d ignored them, and even learned to laugh at himself.

Over time, he’d graduated from a few minutes with the traffic update to several primetime hours every week-day as the presenter of the flagship breakfast show on Ghana’s leading radio station and, boy, was he loving it!

He backed it up with a smile as big as his head, revealing his emblematic gap tooth.

And so with the line open to London, that’s how I did the live interview with Komla Afeke Dumor for Network Africa hosted, I believe, by Bola Mosuro. And that was Komla’s maiden appearance of any kind on the BBC.

Sadly, I never got to interview Komla again to ask what that interview meant to him in retrospect.

Or whether he even remembered it on his first morning as the host of Network Africa many years later.

The writer is the Board Chairman of the National Communications Authority (NCA).