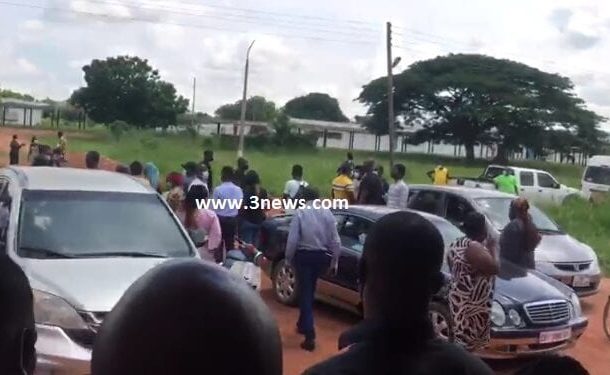 A meeting between government officials and staff and management of Pantang Psychiatric Hospital on Monday, July 5 was disrupted by suspected land guards.

3news.com reported that the meeting was to talk the striking nurses back to work.

The nurses, members of the staff union, had had to take a decision to proceed on strike following several complaints to authorities about attacks from land guards.

Many of them had fled in fear for their lives.

Medical Director at the Hospital Dr Frank Baning on Thursday, July 1 threatened to shut down the facility if steps are not taken by the government to get the nurses back to work.

“I have appealed to the unions not to go on strike. Management alone cannot do this, we are just about 4 or 6 people. So at the moment I have discharged a lot of people. Today I have discharged more people, tomorrow I will discharge more. I can’t take care of them. If by Monday, I haven’t gotten any help to be able to care for them I probably will have to shut it down completely. What else can I do?,” he despaired in an interview with host of the Sunrise morning show on 3FM Alfred Ocansey on Wednesday.

On Monday, when the Deputy Minister of Employment and Labour Relations, Bright Wereko-Brobbey, was leading the government’s negotiation team, the land guards stormed the venue, bringing the meeting to an abrupt end.