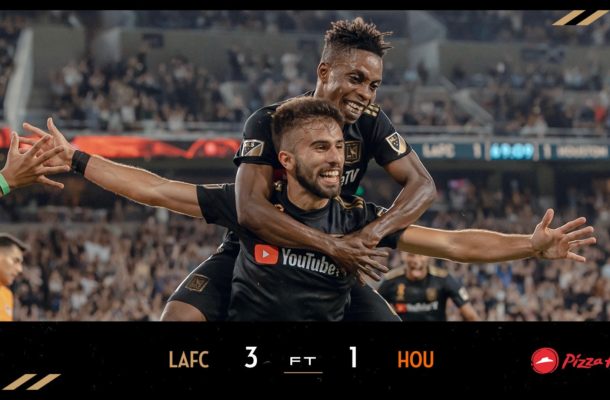 Latif Blessing featured as Los Angeles Football Club made history on Wednesday, clinching the 2019 Supporters’ Shield as the team with the best record in the 2019 MLS regular season, with a 3-1 win over the Houston Dynamo.
The Ghanaian international lasted the entire duration of the match at The Banc.

Goals from Carlos Vela, Diego Rossi and Eduard Atuesta canceled out an own goal from Tyler Miller to deliver the key three points, ensuring New York City FC cannot catch up to and surpass LAFC by the end of the regular season.
LAFC are the first team to win the Supporters’ Shield in their first two seasons in the expansion era of MLS, and the first to do it at all since D.C. United in 1997. A couple MLS teams have won trophies in their first season in the expansion era (post-1998), the Chicago Fire and Seattle Sounders, but neither team won the Supporters’ Shield and LAFC join those clubs and Atlanta United FC in winning a major title in their first two seasons.