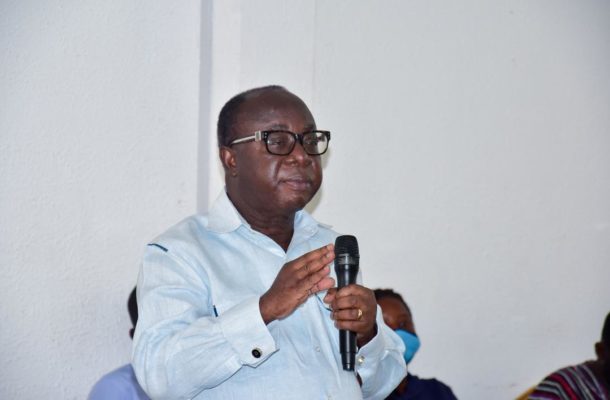 Chairman of the New Patriotic Party (NPP), Freddy Blay is advocating for unity among the party to win the 2024 general elections.

He made the statement when addressing chairpersons from all the 275 constituencies in Koforidua.

In his speech, he stressed the importance of strengthening the foundation of the party in sustaining their vision to continue winning the mandate of Ghanaians to govern the country.

According to him, the chairpersons are the cornerstone of the party and therefore charged them to lay a better foundation for the party.

He said the party can operate effectively with a sustainable source of income. He said there was the need to develop effective plans that can encourage and coordinate contribution and donation.

Mr. Freddie Blay also encouraged them to be independent and resourceful to continue to sustain and help the party.

“It’s understandable that since 1992, our attention has been to fight to win power and sustain power and we’ve been able to do that for two terms continuously apart from the two times that President Kufuor was in power. We must therefore sustain party politics and to sustain it, we must be financially independent to help the party,” he said.

“Since 2016, we’ve won two elections on a roll and we have to be proud of our achievement but how do we ensure sustainability and break the eight-year cycle and ensure twelve years and beyond?” He quizzed.

“As we prepare ourselves not just 2024 and for the future of the party generally, if all constituency chairpersons are to commit themselves fully for us to achieve our goal for 2024 and beyond then we must work to enhance the welfare of everyone. As good and loyal members of the party we must all times defend government initiatives and policies,” he added.

He entreated chairpersons to work closer with the MMDCE’s who are appointed in their districts and the constituency executives.

He said the core value of the party is the commitment and dedication to public service insisting their dedication to delivering to the people of Ghana remain paramount rather than their interest as he strongly believes that can keep the party in power and build a sustainable future.

Mr. Blay implored the chairpersons to put Ghana first in whatever they do to build a sustainable future.

He urged them to come together and dialogue on issues to help sustain the party and not just winning power.