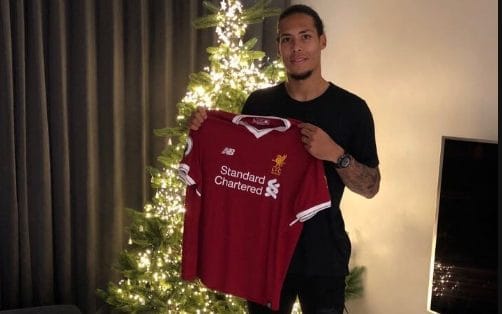 Liverpool have agreed a world-record £75 million signing of Holland centre-back Virgil van Dijk from Southampton and will join the team on the 1st of January 2018 when the transfer window officially opens.

Van Dijk completed a medical on Friday, agreeing personal terms on a contract worth £180,000-a-week and will wear the number 4 shirt for the Reds.

The 26 year old’s transfer fee makes him officially the most expensive defender ever toppling the £52m Manchester City paid to Monaco for Benjamin Mendy in July.

The defender released a statement shortly after the transfer was made official:

"Delighted and honoured to have agreed to become a Liverpool FC player. Today is a proud day for me and my family as I join one of the biggest clubs in world football.

"I can't wait to pull on the famous red shirt for the first time in front of the Kop and will give everything I have to try and help this great club achieve something special in the years to come.

"I would also like to take this opportunity to say thank you to Les Reed, the board, manager, players, fans and everyone at Southampton.

"I will always be indebted to the club for giving me the opportunity to play in the Premier League and despite a difficult last few months, I have thoroughly enjoyed my time at Saints and have made friends for life at the club."