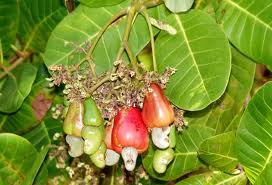 Local cashew processors are unable to obtain adequate supplies of raw materials for processing due to intensive competition with purchases by exporters of raw cashew nuts at the farm gate, resulting in the closure of nine primary processing units out of thirteen with total installed processing capacity of 65,890 metric tonnes.

The cashew sector value chain is also faced with some major challenges including production, trade and marketing, access to finance, research and development, legal, institutional and regulatory framework, and environmental impact of production and processing.

“With all these challenges, i must indicate that plans are very much advanced in respect of the establishment of a regulatory board for the cashew sub-sector in Ghana and very soon approval will be given for the commencement of its activities.

“This is necessary to regulate and create a conducive environment for the growth and development of cashew with consequential benefits to the economy of the country, a Deputy Minister of Food and Agriculture, Dr. Ahmed Yakubu Alhassan, at the 3rd edition of the master training programme on cashew value chain promotion held in Sunyani, Brong Ahafo.

He said the establishment of the board is to create a platform to formalize interactions between government and the private sector to implement policies to ensure the viability of the cashew amongst others, adding that, the board is necessary to conform to international best practices in some leading

producing countries that have witnessed massive increase in production and value addition in cashew value chains.

He mentioned that government will continue to provide the policies and investment frameworks to encourage robust involvement from the private sector to shore up gains chalked so far.

Paramount among the policies which have been formulated by the ministry include the development of a 10-year cashew master plan for the country, which was financed by African Cashew Initiative (now competitive cashew initiative).

Thanking the organisers of the training programme, and the participants for their interest and passion to strengthen the cashew value-chain activities, he said “the master training programme is an important “next step” in the intense collaborative efforts and work being done by ComCashew, with support from the Ministry of Food and Agriculture, the Ministry of Trade and Industry, African Cashew Alliance and other partners.

The target will also include plans to intensify investments in research and development and establish nursery infrastructures to produce over 5 million improved planting materials for cultivation within 5 years.

The 3rd edition of the master training programme on cashew value chain brought together over 70 cashew experts from the producing countries of the sub-region to discuss best practices and lessons learnt as well as to build national and regional networks for future collaboration.

The training programme was organised by the Competitive Cashew initiative (ComCashew) in partnership with the African Cashew Alliance (ACA), the Ministry of Food and Agriculture (MOFA) and the Cocoa Research Institute Ghana (CRIG) and was part of the programing for cashew value chain promotion aimed at ensureing that participants will return to their host institutions, organisations, to have a multiplier effect on the cashew industry when sharing their knowledge and experiences gained by attending this tailor-made training.

The training programme covered the main steps of good improved planting material development and the importance of good agricultural practices (GAP) in cashew production. Participants were also introduced to monitoring and evaluation and leadership and communication.

Rita Weidinger, Ag. Country Director GIZ GH/ Executive Director of ComCashew explained that Ghana has shown the way in production with high yields estimated at 800 kg/ hectares with some districts especially in the Brong Ahafo Region even beyond 1000 kg/ hectars, steadily increasing towards the international benchmark of 1500 kg/ha.

“Countries present here, jointly produce about 40% of the world cashew production – with Côte d´Ivoire with about 700.000 MT making up about 25% of the total world production, being number 1 producing country.

“Besides the technical innovations, we acknowledge the increasing attention of policy makers, and thus the importance of interplay between value chain actors, and public-private dialogue – as just in 2016 the high prices for RCN led to increased farmers interest in maintaining and expanding cashew farms, whilst the young cashew processing industry struggles to become competitive.”

Mr. Fredrick Alipui, Policy Advisor, Ministry of Trade and Industry observed that Ghana is making strides at ensuring that value is added to raw cashew nuts to maximize the profit in cultivating cashew which is one of the products selected to be promoted under the National Export Development Strategy.

“We are currently engaging all stakeholders in the industry to develop a framework that would streamline activities along the value to achieve this objective. The Ministry is also ready to dialogue with everyone ready to promote the cashew industry.

“I trust that African countries may support each other in this agenda of value addition and promote Intra-African and Regional trade to ensure that this agenda becomes a success,” he said.