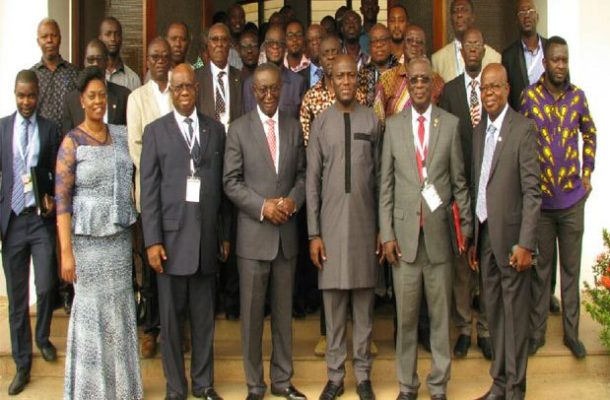 Joe Ghartey, Minister of Railways Development, says under the Ghana Railway Master Plan, a new railway network of 4,007 kilometers will be constructed with an investment of approximately $21,507,920.

According to him, local players would be involved in the construction of the new railway network in six phases.

Making this known in a speech read on his behalf at the opening ceremony of the first-ever week celebration of the Ghana Consulting Engineers Association (GCEA) held Wednesday in Accra, he said, “The Ministry of Railways Development will not invest such a huge amount in the sector without considering local industry players on a quality and capacity-based approach. We therefore support the call for a local inclusion policy on any investment in the country.”

The event was themed: “The role of Consulting Engineers and the Development Agenda of Ghana.”

The Minister revealed that implementing such priority projects would create jobs, facilitate trade and industrial development, adding that the railway projects would provide opportunity for various associations to take advantage and seek jobs for their members.

“The development of the railways sector will completely transform the economy,” the Minister noted.

Mayor of Accra, Mohammed Adjei Sowah, in a remark, said it was important that political leaders work closely with professional Consulting Engineers to find solutions to problems confronting the nation in the areas of providing accommodation and the construction of energy efficient buildings to help reduce the electricity usage on the national grid.

President of GCEA, Ing Albert Ogyiri, on his part, said that the indigenous consulting engineering industry had a critical role to play in the development of infrastructure development in Ghana, adding that such infrastructure had to be safe, sustainable, resilient and most importantly offer good value for money.

Ing Mrs. Carlien Bou-Chedid, President of the Ghana Institution of Engineers, explained that with the coming into force of the Engineering Council Act 819, it had become even more important that industry sectors became better organized, so they were well positioned to address the needs of their sector and engage in the advocacy that would enable those in the sector contribute more meaningfully to the development of the country.

Chairman of the Group of African Member Association (GAMA) of the International Federation of Consulting Engineers (FIDIC), Ing. F. Asare Yeboah, congratulated GCEA for organizing a public event to discuss issues related to the development of Ghana’s infrastructural development.

The three-day conference will end today with an Annual General Meeting and Exhibition and also a planned tour to project sites of Jospong Group at Adjen Kotoku and Lavender hill.