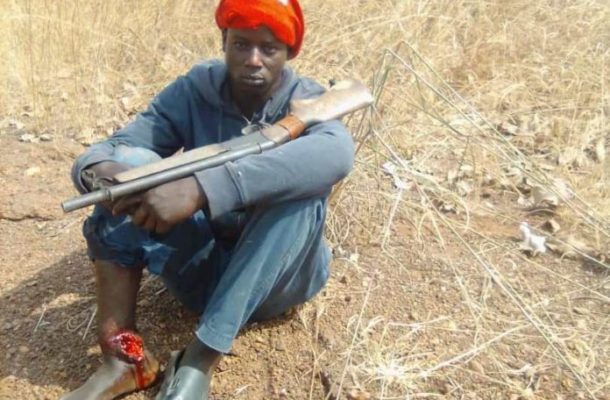 The suspect bleeding after the shootout

An on-duty officer foiled a robbery operation and shot one of the suspects on the Bole-Bamboi highway in the Savanna region, authorities said on Sunday night.

G/L/Cpl Edmond Kyei Baffour was escorting a Mercedes Benz Distribution Van with registration number GX 5225-17 with two other occupants —when the incident happened on Friday, January 17, 2020 at about 1pm local time.

The occupants were transporting assorted drinks from Banda Nkwanta to Tinga on the Bole-Bamboi highway where they were attacked by the robbers, numbering about three.

“On reaching a section of the road between Banda Nkwanta and Nouyiri Community, three masked armed men emerged from the bush and started firing in an attempt to rob the said distribution van”, part of a police statement read.


G/L/Cpl Baffour returned fire and “hit one of the robbers who gave his name as Seidu Salifu aged 25, a Fulani herdsman at Bole”.

Items retrieved from him included a locally manufactured single barrel shot gun, one live cartridge, a face mask, a Techno mobile phone and a cash of GHS 130.

He named his accomplices as Elliasu and Sumaila all residents of Bole.

Salifu has since been admitted at the Bole District Hospital under police guard as investigation commences.

There is a serious manhunt for the named accomplices as police intensify patrols at the enclave.