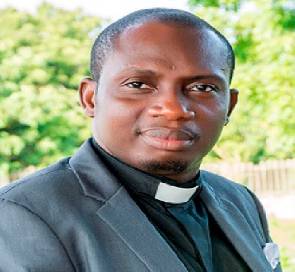 It seems a lot of people have still not gotten over Lord Paper’s controversial “Awurama” video yet as jabs still keep trickling in from all angles.

Not so long ago, Arnold Mensah Elavanyo – entertainment critic and host of Ghana’s only social media celebrity talk show “Vibes in 5” in an interview with Ghanaweb.com went very hard on Lord Paper’s video describing it as one that insults the sensibility of Ghanaians.

Speaking on the Rundown Show on TV Africa, angry Counselor Lutterodt described the Awurama video as Satanic and demonic after Sammy Flex had endorsed it.

According to him, everybody who took part in the production of the video is equally demonic.

He further stated that it is improper to encourage artists to go on shooting such videos and making them public in the name of creativity.

“I am surprised you Sammy Flex say Lord Paper’s video is creative. That video is Satanic and Demonic. Everybody who took part in shooting it I mean the camera men and all those around during the shoot are equally Demonic.” He stated.

The Counselor said he finds it difficult to accept a video which has the Lord Paper guy massaging a lady’s genitals through her pant, fondling her breasts and having sex right on camera in the name of music video as creative work of arts.