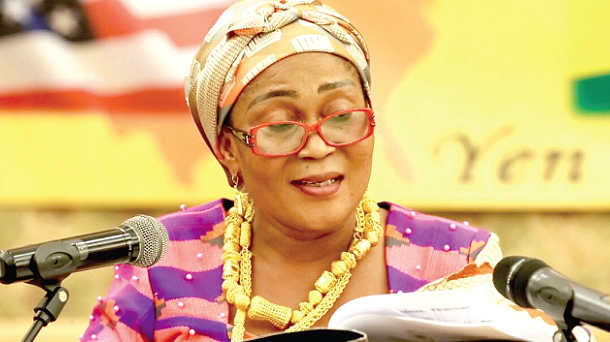 The First Lady, Mrs Lordina Mahama, has commended Ghanaians living in the diaspora for partnering the government to bring development to the doorstep of the people.

She said the effort was laudable, since it worked towards a shared responsibility of partnering with government to provide the needs of the people.

Mrs Mahama was addressing a gathering of chiefs and queenmothers, both local and international, as well as other dignitaries, at a colourful durbar to mark the 7th Annual Convention of the Council of Brong Ahafo Associations of North America (COBAANA) at Worcester, Massachusetts in the United States (US) last Sunday.

The convention was on the theme ‘Changing Lives Through Education”.

Over the past years, COBAANA has taken the leading role of bringing all Brong Ahafo citizens in the United States and Canada together to socialise and deliberate on ways to mobilise resources to support deprived communities in the Brong Ahafo Region.

She said the theme for the event fitted perfectly into the objectives of the Lordina Foundation, as one of its core objectives was changing lives through education, particularly, through technical and skills-based training.

According to the First Lady, early childhood education was crucial to the total development of a child, stressing that the scheme could tremendously change the future of a child.

That, she said, was the goal for the gathering which aimed at raising funds to put up a six-classroom block at Ayaakomase, near Nsoatre in the Brong Ahafo Region to supplement government’s efforts.

Mrs Mahama said the 2015 report of the United Nations Educational, Scientific and Cultural Organisation (UNESCO) indicated that sub-Saharan Africa remained home to the largest out-of-school children population in the world, and that although Ghana continued to face its own challenges, it had achieved universal enrolment of children in primary schools.

That, she said, had made Ghana a role model for many African countries in the provision of Free Compulsory Universal Basic Education (FCUBE) and added that the free community day senior high schools had increased access to education for many vulnerable groups.

The First Lady said the policy of progressively free secondary education was being extended to 120,000 boarding students this academic year, and that as of the end of the Millennium Development Goals (MDGs) in 2015, Ghana had attained over 97 per cent primary school enrolment.

Mrs Mahama indicated that her foundation continued to present working tools to designers, beauticians and artisans to help them start their businesses and recently presented start-up tools to some of them in Kenyasi, Kukuom and Sankore among others.

She said her foundation had facilitated the construction of a modern community information centre for the Kintampo community and its environs at Ampoma, which would serve as an ICT hub for the community and allow schools in the area access to ICT laboratory, as well as Internet facilities.

She said the foundation was also facilitating the construction of classrooms, dining halls, kitchen and dormitories, boreholes and toilet facilities in schools across several districts of the Brong Ahafo Region.

In a goodwill message, the Mayor of Worcester, Mr Joseph Petty, commended the association for working hard to provide a school building in an effort to support the government to improve access to quality education.

Ghana’s Ambassador to the United States, Lieutenant General Joseph Henry Smith (retd),  said COBAANA had made progress due to commitment and genuine interest of members to make significant impact on the lives of people and communities back home.