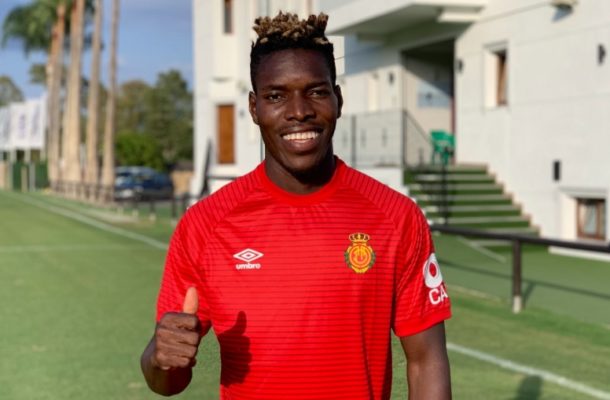 Ghanaian left-back Lumor Agbenyenu has completed a transfer to newly promoted Spanish top-flight side Real Mallorca ahead of the upcoming season.

The 23-year-old joins the La Liga newcomers on a season-long loan deal from Portuguese side Sporting Lisbon as predictions are that by online gambling punters of an excellent season.

He was a member of the Ghana squad that played at the just ended 2019 Africa Cup of Nations staged in Egypt.

Agbenyenu becomes the second Ghanaian in Mallorca’s squad after midfielder Baba Iddrisu Mohammed in the squad that is seeking to make a big impact on their return to the top-flight.

They were relegated from La Liga by a single point in 2013 and spent much of the following seasons either fighting relegation to the third tier or abjectly sitting mid-table.

Eventually, in 2017, the Balearic club were relegated to the regionalised third tier of Spanish football.

As recently as 2003, Mallorca won the Copa del Rey, and finished in the top half of the Primera División but the downward spiral was arrested in 2017 with some quality senior players injected into the squad.

The threat of relegation soon disappeared after a good opening to the season, and all of a sudden in just the space of a year, a squad went from playing Segunda B football to dreaming of Primera.

Ultimately this was all done fully within the club’s means too; Mallorca’s budget last year was around €7.5m - their playoff final opponents was €20m.

It all came down to one night, in one city obsessed with fire. Down 0-2 from the first leg, Mallorca needed a miracle on the night of the Revetlla de San Joan, St. John’s Day Eve, for an awful translation. A night that is famous for fireworks, bonfires, and staying out all night eating, drinking, and partying.

Mallorca fans would be doing so to either celebrate or to drown sorrows. What they got were the most spectacular fireworks seen on the island for decades, as three wonderful goals completed a perfect comeback that will live forever in the memory of all Barralets fans.

Three magnificent goals, all from long range and brilliantly worked and finished, lit the entire island up for one of the most special nights Spanish football has seen for years.

Manager Vicente Moreno was interrupted a minute into his post-match press conference and drowned in champagne from his players. “There are no words to define these players,” he said. “It gives us an enormous amount of happiness because of how difficult this is to achieve. Our players and fans deserve this.”

The Primera División will no doubt be richer next season for having Mallorca in it.