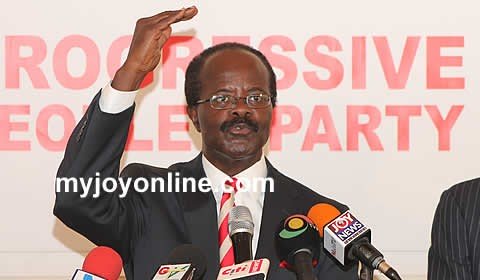 He says the rate at which President John Mahama and Nana Addo Dankwa Akufo-Addo attack each other in the run up to the December polls is distasteful.

"Akufo-Addo talked about Mahama insulting him and calling him a dictator [and] Mahama said Akufo-Addo called him a thief and incompetent. What is presidential about this?” he quizzed.

The PPP leader and business mogul disclosed this through a Video News Release (VNR) via social media Thursday.

Speaking in an interview with Paul Adom-Otchere on Accra-based Television station, Metro TV Wednesday, President Mahama accused the NPP leader of attacking his credibility as the leader of the nation.

"He says when he comes to power he won’t steal your money what does that mean? It means I am stealing Ghanaians’ money," Mr Mahama said on the programme, adding Mr Akufo-Addo has referred to him as a thief.

But Dr Nduom says being badmouthed in the media is an occupational hazard politicians go through in the country.

There are crucial works that need to be done in the country to improve the living standard of Ghanaians which is a departure from what the two Presidential Candidates are doing, Dr Nduom said.

“Have we forgotten about dumsor, unemployment, lack of potable water, people who are suffering from cholera and malaria?” he quizzed adding, the two leaders need to focus on how to address the poor conditions Ghanaians are living in.

“Ghana needs serious politicians who will pay attention and work hard to find solutions to the nation's many problems,” Dr. Nduom said.