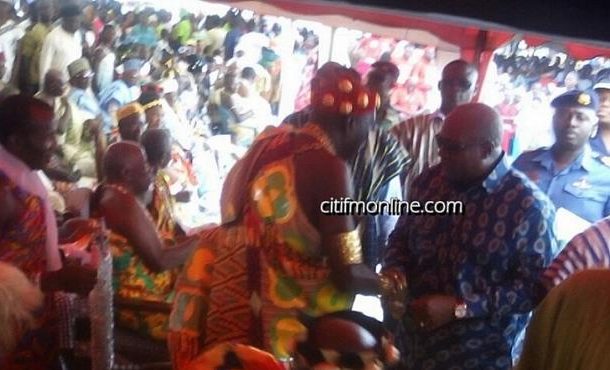 President John Dramani Mahama on Saturday joined the chiefs and people of Oguaa to celebrate this year's Oguaa Fetu Afahye at Cape Coast in the Central Region. He was accompanied by the Central Regional Minister, Kwaku Rickett Hagan, First Deputy Speaker of Parliament Ebo Barton Odro, Chairman of the National Democratic Congress in the region, Allotey Jacobs and other government officials. The paramount chief of the Oguaa Traditional Area, Osabarima Kwesi Atta II, bemoaned the falling standards of education in the country which he said reflected in this year's West African Senior School Certificate Examination (WASSCE). But the President rejected the claims saying this year's WASSCE results have been one of the best in the last decade.

He however advised parents to prioritize the education of their wards urging them to treat it “as a key venture.” “We must take interest in the education of our children…encourage them to do their homework and not to watch TV all day. I am convinced that with the support of teachers, parents, traditional leaders….such trend can be reversed,” the President added.