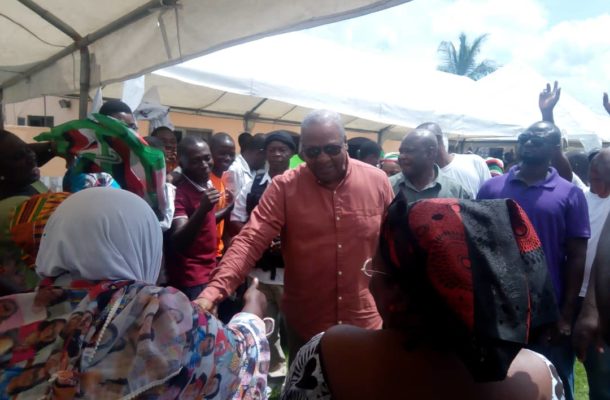 Former President John Dramani Mahama has indicated that Ghanaians are ready to vote back the opposition National Democratic Congress (NDC) to power after having a feel of the ruling New Patriotic Party (NPP).

Mr Mahama made this comment on Wednesday as he began his campaign to lead the NDC into the next elections.

Addressing party supporters and constituency executives of Awutu Senya West at Bawjiase, Mahama said Ghanaians having experienced his government and that of Akufo-Addo, now convinced the NDC is the best party to help them.

“As the adage goes, you need to carry both water and alcohol to know the one that is weightier. I have a firm belief that today that Ghanaians have experienced the two and know which is weightier. I believe by God’s grace, Ghanaians will give the NDC victory in 2020,” he said.

Mr. Mahama is currently on a four-day campaign tour of the Central Region where he is touching base with party executives and supporters as well as opinion leaders.

According to Mr. Mahama, when he lost the 2016 elections, he took solace in the fact that “Sometimes, when you desirously want something, God does not give it to you”.

He said he believes in the biblical quote that “whatever God does is good,” adding “If you look at it carefully, it was the will of God for us [NDC] to lose the [2016] elections”.

Mahama added: “It is not every time that one will be victorious in whatever he seeks to win; sometimes you will lose.”

The former president said it is important that one learns from his loss and mistakes but should not let those deter him to make another move, adding, “having lost the 2016 elections, we’ve prepared to face the 2020 elections head on”.

“In 2016, a lot of mistakes were made but we cannot blame one person; some constituencies did not train party agents well, some agents too did not turn up to observe the elections. If people vote in an election and your agent is not there, definitely they will cheat you,” he claimed.

Also, he said some campaign items did not get into the right hands; mistakes he said they have identified and taken measures to prevent them from reoccurring in the next elections.

He is scheduled to meet with Regional and constituency executives as well as delegates of the National Democratic Congress. He will share his vision with delegates and seek their mandate to lead the NDC to victory in the 2020 election.

The former President is due to return to Accra on Saturday.